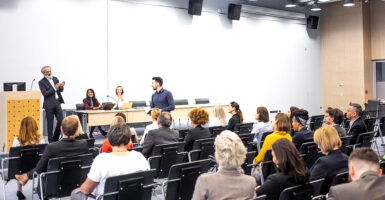 The director of the Discovery Institute’s Center on Wealth and Poverty has formed a legal coalition to end critical race theory training programs in the federal government. (Photo: Sanjeri/Getty Images)

One of President Joe Biden’s new executive actions is in violation of the Civil Rights Act of 1964, according to a coalition of legal foundations and lawyers, which is planning to take legal action to stop it.

Christopher Rufo, director of the nonprofit Discovery Institute’s Center on Wealth and Poverty, says Biden’s action will not only lead to further division in the nation, but is also unconstitutional.

Rufo, who has conducted extensive research on the harmful effects of critical race theory training, says his findings led to Trump’s decision to ban the programs in the federal government at the end of last summer.

Critical race theory is the belief that white people use their economic, legal, and social status to create and maintain elitism over people of color.

The Trump administration announced an end to the programs when it became aware of the fact that the federal government was spending millions of taxpayer dollars on training programs that “undercut our core values as Americans and drive division within our workforce,” according to a memorandum announcing the ban.

In his research, Rufo uncovered that the Treasury Department “held a training session telling employees that ‘virtually all white people contribute to racism’ and demanding that white staff members ‘struggle to own their racism.’”

Howard Ross, who led the training at the Treasury Department, has “billed the federal government more than $5 million for diversity training over the past 15 years,” Rufo said.

Ibram X. Kendi, author of the book “How to Be an Antiracist,” has also benefited financially from giving critical race theory training. Last September, the school district in Virginia’s Fairfax County, a suburb of Washington, D.C., paid Kendi $20,000 to give a one-hour anti-racism online lecture to teachers and school leaders.

Rufo’s new Stop Critical Race Theory coalition has already filed three lawsuits against public institutions conducting the progressive training program and plans to file more suits in the coming months, according to a statement on Twitter.

“The Constitution is very clear. The government has to at least aspire to treat Americans equally,” Heritage Foundation senior fellow Mike Gonzalez told The Daily Signal in a phone interview Friday.

“Any of these trainings that do not treat Americans equally violate the Constitution,” said Gonzalez, author of the book “The Plot to Change America: How Identity Politics is Dividing the Land of the Free.”

The legal coalition hopes one of the lawsuits will make its way up to the U.S. Supreme Court, at which point it will argue that the training programs violate the Civil Rights Act of 1964, which “prohibits discrimination on the basis of race, color, religion, sex, or national origin.”

“Critical race theory is a grave threat to the American way of life,” Rufo said in a statement. “It divides Americans by race and traffics in the pernicious concepts of race essentialism, racial stereotyping, and race-based segregation—all under a false pursuit of ‘social justice.’”

In addition to the Discovery Institute’s Center on Wealth and Poverty, members of the coalition include the Southeastern Legal Foundation; the Upper Midwest Law Center; Jonathan O’Brien with Schoolhouserights.org; the Los Angeles-based Pivtorak Law Firm; Wally Zimolong of the Wayne, Pennsylvania-based Zimolong LLC; and Eric Early and Peter Scott of Early, Sullivan, Wright, Gizer & McRae, a law firm with offices in six U.S. cities.

The coalition’s ultimate goal is not only to ban critical race theory programs at the federal government, but to abolish the training, which has expanded into secondary school and college classrooms, as well as corporate boardrooms.

“The conservative legal movement and a network of private attorneys are gearing up for war against critical race theory,” Rufo said. “We will fight, and we will win.”