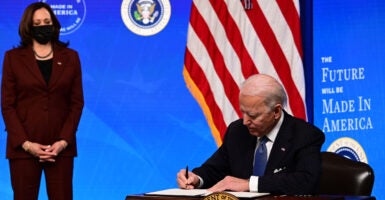 With Vice President Kamala Harris looking on, President Joe Biden on Monday at the White House signs a "Made in America" executive order intended to increase the amount of federal spending that goes to American companies. (Photo: Jim Watson/Agence France-Presse/Getty Images)

President Joe Biden signed an executive order Monday ensuring transgender Americans can serve in the military, along with a “buy American” order to steer federal government purchases to products manufactured in the United States.

While former President Donald Trump called him “Sleepy Joe” during the campaign, Biden quickly has sped past Trump on executive actions after the first few days of their respective tenures.

The Biden administration made big promises about sweeping changes in his first 10 days.

In just the first three days, Biden issued 30 executive orders, presidential memorandums, and agency directives—all without the consent of Congress, according to The Associated Press, which included actions taken by federal agencies in its report.

Many of the Biden actions have pertained to curbing the COVID-19 pandemic, including restrictions on entry to the U.S. by most non-U.S. citizens.

In March 2020, during the presidential campaign, Trump tweeted his administration had done a good job of combating the pandemic, “including my very clear decision to close the ‘borders’ from China, against the wishes of almost all.” Biden responded in a tweet, “Stop the xenophobic fear-mongering. Be honest. Take responsibility. Do your job.”

Biden’s executive actions during his first week included tying federal education dollars to allowing biological males to play on female sports teams at schools; returning the U.S. to participation in the World Health Organization; rejoining the Paris climate agreement; doing away with the 1776 Commission, which focused on creating a public narrative on American history to counter left-wing anti-American narratives; reversing Trump’s travel ban from countries with unstable governments; and killing the Keystone XL pipeline.

Those included the travel ban on people from failed states; rolling back elements of Obamacare pending what he hoped would be a full congressional repeal; a regulatory freeze; withdrawing from the Trans-Pacific Partnership trade pact negotiations; approving construction of the Keystone XL and the Dakota Access pipelines; and expediting environmental review processes.

One of the Biden administration’s goals is reportedly to erase as much of the Trump agenda as possible. Former Clinton and Obama White House adviser John Podesta told The New York Times: “I don’t think it’s fair to say that most of what Trump did can be undone in an afternoon. It’s going to take at least 10 days.”

Still, Trump leaves behind more than 230 federal judicial appointments, which can’t be undone. Also, Trump’s legislative accomplishments—such as tax reform, a trade deal with Canada and Mexico, and reform of the Department of Veterans Affairs, among others—would take an act of Congress to reverse.

“Through the buy-America executive order, the president will put to work the nearly 600 billion taxpayer dollars that goes toward federal contracting in support of American manufacturing for good-paying jobs for American workers,” she said.

Obama’s two terms were marked by his boasts of using “pen and phone” executive actions to circumvent Congress.

A flurry of executive orders are not uncommon in the modern era, but can indicate what a president’s term will be like, said presidential historian Craig Shirley.

“President Biden and his base want to go left similar to after the elections of 1932 and 1964, with programs similar to the New Deal and the Great Society programs,” Shirley told The Daily Signal. “He has no interest in unifying the country, because the country doesn’t want to go in that direction.”

Biden’s executive actions on energy and the economy—such as returning to the Paris Agreement and ending the Keystone XL pipeline—will cost jobs and run the risk of making the United States more like California, said Ron Stein, an energy analyst with the Irvine, California-based PTS Advance energy and infrastructure consulting firm.

“Biden loves California and is starting to impose the same inflationary costs to the other 49 states, with higher costs for electricity, fuel, and labor, all of which impacts the cost of everything else,” Stein told The Daily Signal. “Discouraging America’s energy independence will have Americans beholden to foreign countries for our crude oil, like California, and beholden to China for the mining of minerals and metals to support wind, solar, and electric-vehicle battery construction.”

Trump signed a total of 220 executive orders during his term in office, according to the American Presidency Project at the University of California at Santa Barbara. That’s the most executive orders any president signed in a single term since President Jimmy Carter, who signed 320 executive orders from 1977 through 1981.