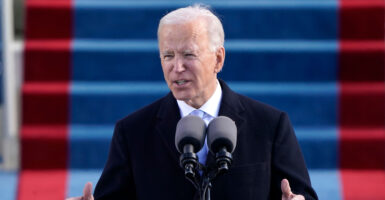 “We must end this uncivil war that pits red against blue, rural versus urban, conservative versus liberal,” President Joe Biden says in his inaugural speech Wednesday after being sworn in as the 46th president. (Photo: Patrick Semansky/AFP/Getty Images)

President Joe Biden led a silent prayer and read Scripture as he called for unity in an inaugural address that not only followed disputed election results, but was delivered where a violent riot rocked the Capitol just two weeks earlier.

“The forces that divide us are deep and they are real, but I also know they are not new,” Biden said. “Our history has been a constant struggle between the American ideal that we all are created equal and the harsh, ugly reality that racism, nativism, fear, demonization have long torn us apart.”

“We must end this uncivil war that pits red against blue, rural versus urban, conservative versus liberal,” the new president added.

Biden said each side should listen to and respect each other.

The new president called out “lies told for power and for profit” and stressed the need to defend truth and defeat lies.

Biden himself, however, is known for fiery rhetoric in campaign settings.

In 2018, he said of then-President Donald Trump: “I’d take him behind the gym and beat the hell out of him.” As vice president, referring to the Republican ticket of Mitt Romney and Paul Ryan during the 2012 presidential campaign, Biden told a mostly black audience: “They’re gonna put you all back in chains.”

Moreover, Biden plans a slew of ideological executive actions in his first 10 days in office that largely are aimed at unraveling Trump’s legacy.

Healing political divisions and tackling an expected upsurge in the COVID-19 pandemic were at the heart of Biden’s first speech as president, which began just before noon after his swearing-in.

He noted that the new coronavirus has killed 400,000 Americans—more, he said, than died in World War II.

“We must set aside politics and finally face this pandemic as one nation. And I promise you this, as the Bible says: “Weeping may endure for a night, but joy comes in the morning.”

The crowd attending the inauguration was far smaller than normal not only because of social distancing restrictions but heightened security after the Capitol riot during which authorities urged Americans to stay home.

Speaking to all who were viewing the inauguration at home or work, Biden called for a moment of silent prayer.

“I ask you, let’s say a silent prayer for those who have lost their lives and those left behind and for our country to remember all those who we lost in this past year to the pandemic, those 400,000 fellow Americans—moms, dads, husbands, wives, sons, daughters, friends, neighbors, and co-workers,” Biden said.

After the brief silence, he said: “Amen.”

Trump departed the White House before 9 a.m. and gave brief remarks to supporters at Joint Base Andrews before boarding one final flight on Air Force One to Mar-a-Lago, his resort in Palm Beach, Florida.

The House of Representatives impeached Trump for inciting an insurrection one week before his term expired, and an unprecedented Senate trial of a former president is pending.

Biden also made apparent references to the summer’s race riots, the challenge of climate change, and the recent Capitol riot.

“A cry for racial justice some 400 years in the making moves us. The dream of justice for all will be deferred no longer,” Biden said. “A cry for survival comes from the planet itself. A cry that can’t be any more desperate or any more clear. And now a rise of political extremism, white supremacy, domestic terrorism that we must confront and we will defeat.”