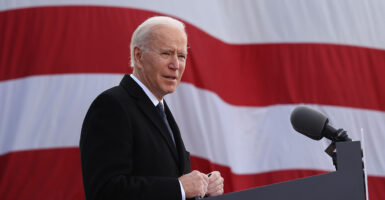 A day before being sworn in as the nation's 46th president, Joe Biden speaks Tuesday at a National Guard center in New Castle, Delaware, named for his late son Beau. (Photo: Chip Somodevilla/Getty Images)

Joe Biden will have a busy day after taking the oath of office as president at noon Wednesday, as the Biden campaign promised and incoming chief of staff Ron Klain recently affirmed.

Klain issued what has become a widely reported Jan. 16 memo on Biden’s first 10 days as president, laying out a plan to aggressively make changes that won’t require action by Congress.

Just as outgoing President Donald Trump reversed many of predecessor Barack Obama’s executive actions, Biden is about to do the same to Trump.

Here are 11 major actions Americans can expect from Biden on Day One.

The Obama administration issued guidance from the Department of Education to schools, warning that that under federal law known as Title IX, schools could lose funds for discriminating on the basis of sex if they didn’t allow transgender students to use the restroom of their choice.

“On his first day in office, Biden will reinstate the Obama-Biden guidance revoked by the Trump-Pence administration, which will restore transgender students’ access to sports, bathrooms, and locker rooms in accordance with their gender identity,” the Biden campaign said on its website. “He will direct his Department of Education to vigorously enforce and investigate violations of transgender students’ civil rights.”

Not all of Biden’s actions will be executive actions. Presidents don’t always submit legislative proposals to Congress on their first day in office, but aides say Biden will do so on a longtime agenda item that eluded Democrats: a path to citizenship for illegal immigrants.

“The president-elect … will continue to advance legislative solutions to critical problems, such as in the immigration bill he will send to Congress on his first day in office,” Klain wrote to the transition team.

Klain didn’t provide details about the immigration legislation in the memo, but it likely will include a bill to provide legal status to the nation’s 11 million or more illegal immigrants, as mentioned by the campaign.

On his first day in office, the campaign said, Biden “will send to Congress a bill for legislative immigration reform that will modernize our immigration system and give nearly 11 million undocumented immigrants a roadmap to citizenship.”

Without explaining, the Klain memo also said that Biden will take executive action on his first day to “restore humanity to our immigration system.”

Obama entered the multinational Paris climate accord calling for countries to reduce carbon emissions that some scientists say cause global warming or climate change. Trump withdrew from the climate pact in 2017.

The United States will rejoin the United Nations’ Paris Agreement, which includes 174 countries, on Inauguration Day, the Klain memo says.

According to a report from The Heritage Foundation, the energy regulations accepted by the Obama administration as part of the accord could have killed hundreds of thousands of jobs, harmed American manufacturing, and destroyed $2.5 trillion in gross domestic product by the year 2035.

The agreement also could have been a barrier to America’s achieving 3% economic growth, the think tank concluded.

Biden won’t stop there, according to his campaign:

On Day One, Biden will rejoin the Paris Climate Agreement. But we must go further. In his first 100 days in office, Biden will convene a climate world summit to directly engage the leaders of the major greenhouse gas-emitting nations of the world to persuade them to join the United States in making more ambitious national pledges, above and beyond the commitments they have already made.

This won’t be the only climate action, Klain wrote: “The president-elect will sign additional executive actions to address the climate crisis with the urgency the science demands and ensure that science guides the administration’s decision making.”

The Supreme Court upheld Trump’s restrictions on travel from countries with failed states, including some majority-Muslim countries. Nevertheless, Biden intends to reverse what Klain called the “Muslim ban.”

The Biden campaign had pledged: “As president, Joe will rescind the Trump administration’s Muslim ban on Day One and urge Congress to pass the No Ban Act to ensure future administrations cannot restore Trump’s ban.”

The Trump administration pushed development of COVID-19 vaccines through the project called Operation Warp Speed. The federal government shipped out two approved vaccines to states, but many of them have been inefficient in administering the shots.

Biden said Jan. 15 that he would order the federal government to establish vaccination centers on his first day in office.

“On my first day in office, I will instruct the Federal Emergency Management Agency, FEMA, to begin setting up the first of these centers,” Biden said. “By the end of our first month in office, we will have 100 federally supported centers across the nation that will ultimately vaccinate millions of people.”

During remarks Dec. 22 on COVID-19, Biden said: “My administration will start to do its part on its first day—with masking requirements, a new strategy on testing, and accelerated production of protective gear.”

Biden wanted to impose a national mask mandate, but advisers reportedly determined that would lack the constitutional authority to do so.

In what largely will be a symbolic move on existing policy, Biden will launch a “100-Day Masking Challenge” expected to include a mask mandate on federal property and during interstate travel.

Many health experts have been skeptical of the effectiveness of such a national mask mandate.

In a bone thrown to one of Democrats’ biggest constituencies, Biden has said he will give more power to federal labor unions on his first day as president.

“On Biden’s first day in office, he will restore federal employees’ rights to organize and bargain collectively, and will direct his agencies to bargain with federal employee unions over nonmandatory subjects of bargaining,” his campaign said.

In his four years, Trump helped curb the power of federal unions, a plan upheld in courts.

As part of a move for civil service reform, Trump also made it somewhat easier to fire federal employees, who are known for being nearly impossible to terminate for cause.

Biden plans to extend coronavirus-related limits on student loan payments, according to the Klain memo. The incoming president has indicated support for canceling student loan debt.

“As previously announced, [Biden] will ask the … Department of Education to extend the existing pause on student loan payments and interest for millions of Americans with federal student loans,” the memo says.

Biden’s campaign website called for forgiving “all undergraduate tuition-related federal student debt from two- and four-year public colleges for debt-holders earning up to $125,000.”

In light of the economic downturn during the COVID-19 pandemic, Klain said, Biden will sign an executive order to “extend nationwide restrictions on evictions and foreclosures and provide more than 25 million Americans greater stability, instead of living on the edge every month.”

Biden also seeks to enforce a national right to housing—and intends to lay the groundwork on his first day, according to the campaign:

Biden believes everyone should have the right to a safe roof over their head. On the first day of his administration, he will direct his secretary of Housing and Urban Development to lead a task force of mayors and other local elected officials to put on his desk within 100 days a roadmap for making this right a reality nationwide.

Biden, an opponent of the death penalty, will impose a temporary halt to federal executions, Politico reported. This comes as many Democrats in Congress are calling for ending the federal death penalty

Since July, the Federal Bureau of Prisons has executed 13 death row inmates, the last on Saturday, according to The Associated Press. The executions followed a 17-year hiatus by the federal government, and Trump set a 120-year record for a president in executions on his watch, AP reported.

A section called “Racial Equality” in the “Unity Task Force Recommendations,” from the campaigns of Biden and Sen. Bernie Sanders, I-Vt., states:

On Day One, we are committed to taking anti-racist actions for equity across our institutions, including in the areas of education, climate change, criminal justice, immigration, and health care, among others.

The section on racial equality calls for taking executive actions to:

—Direct the Department of Housing and Urban Development to funnel “increased resources to measuring and identifying discrimination in the housing market through such strategies as paired testing and correspondence audits.”

—Roll back actions by the Trump administration, “including restrictions on labor rights, collective bargaining, and unions.”

From Jan. 21 through Feb. 1, the Klain memo also said, Biden’s actions will include executive actions on COVID-19 that could help reopen schools and businesses while expanding testing.

Biden also will push for more coronavirus-related economic relief, according to the memo. He also plans executive actions on “Buy American” provisions, criminal justice reform, and more on climate change.