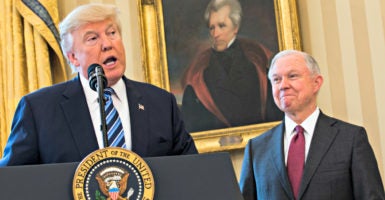 The Trump administration acted Wednesday night to fix the Obama administration’s unlawful “gender identity” school policy and return authority to parents and teachers in the states.

Civil rights officers in the Department of Justice and the Department of Education issued a joint letter saying the administration was rescinding the policy, which had required schools to allow students who identify as transgender to use the restrooms, locker rooms and similar facilities of their choice—or face loss of federal funds.

In the letter, they said the Obama mandate did not show “due regard for the primary role of the states and local school districts” in making education policy.

The Trump administration is doing the right thing in correcting Obama’s unlawful overreach, which imposed a one-sided solution on all 50 states. Parents and teachers in local schools now can work to find win-win solutions that protect the dignity, privacy, and safety of all students.

For years, the Obama administration unilaterally had redefined bans on “sex” discrimination to include “gender identity.”

The problem came to a head May 13, when Obama’s Justice and Education departments sent a “Dear Colleague” letter to our nation’s schools, informing them that “both federal agencies treat a student’s gender identity as the student’s sex for purposes of enforcing Title IX,” a 1972 law prohibiting sex discrimination in federally funded schools.

With this decree, the Obama administration directed all schools to allow “students to participate in sex-segregated activities and access sex-segregated facilities consistent with their gender identity.”

Schools were told they had to allow students access to bathrooms, locker rooms, dorm rooms, and hotel rooms for overnight field trips based entirely on the self-declared gender identities of their students.

On Aug. 21, U.S. District Judge Reed O’Connor ruled the Obama administration’s attempt to redefine sex was unlawful, and blocked the decree from going into effect.

O’Connor held that it “cannot be disputed that the plain meaning of the term sex as used … following passage of Title IX meant the biological and anatomical differences between male and female,” and he placed a nationwide injunction on the administration’s guidance to schools.

But on Feb. 10, with Jeff Sessions as the nation’s new attorney general, the Justice Department withdrew that motion for a stay and cancelled the scheduled oral arguments.

The Trump administration rescinded the Obama guidance saying officials would interpret the word “sex” in Title IX to mean “gender identity.” Instead, the administration will allow parents and teachers to work together in local schools to find nuanced solutions that address the needs of everyone.

Wednesday night’s moves signaled a change in position that could have a significant impact on the Justice Department’s controversial Title IX lawsuit against North Carolina’s Public Facilities Privacy & Security Act (known as HB2), which the Trump administration inherited.

The actions also could affect a Title IX gender identity case, currently set for oral argument at the Supreme Court next month, that depends in large part on the Department of Education’s position.

Last week at The Heritage Foundation, a panel of women explained the many policy problems with “gender identity” laws.

As one of them said, “when gender identity wins, women always lose.”

The panelists—a rape survivor, a lesbian, a feminist activist, a stay-at-home mom, and a conservative—explained how people who identify as transgender should be free to live as they want, but that the law shouldn’t therefore eliminate women-only spaces or redefine what it is to be a woman.

Safe Spaces for Women has a strong interest in ensuring that the voices of women who have suffered sexual abuse are heeded when policies are made that may directly affect their physical, emotional, and psychological well-being. This includes policies that require educational institutions covered by Title IX to admit to female showers, locker rooms, and restrooms biological males who identify as female. While Safe Spaces for Women bears no animus toward the transgendered community, it is deeply concerned that … survivors of sexual assault are likely to suffer psychological trauma as a result of encountering biological males—even those with entirely innocent intentions—in the traditional safe spaces of women’s showers, locker rooms, and bathrooms.

The brief goes on to note that the guidance from the Obama administration was issued “without giving those affected a voice in the process. … improperly circumvent[ing] the notice and comment process when that process was needed most.”

Lanning says “the problem with potential sex offenses is not crimes by transgendered persons,” but rather “offenses by males who are not really transgendered but who would exploit the entirely subjective provisions” of such policies “to facilitate their sexual behavior or offenses.” Lanning explains that:

Allowing a man, based only on his claim to be [a] transgendered woman, to have unlimited access to women’s rest rooms, locker rooms, changing rooms, showers, etc. will make it easier for the type of sex offense behavior previously described to happen to more women and children. Such access would create an additional risk for potential victims in a previously protected setting and a new defense for a wide variety of sexual victimization.

Indeed, as The Daily Signal previously noted, such sexual victimization already is occurring by men who have disguised themselves as women.

What to Do Now

Wednesday night’s actions by the Justice and Education departments will lead to good policy outcomes, which is why it should not be limited to Title IX.

The Trump administration should extend this decision to every area where federal agencies have imposed new “gender identity” rules on the American people without basis in law, without congressional authorization, without considering legitimate countervailing concerns, and without the support of the American people.

Congress should make such administrative actions permanent by reintroducing and passing H.R. 5812, the Civil Rights Uniformity Act, which clarifies that the term “sex” does not mean “gender identity” for the purpose of interpreting civil rights statutes. This would have the benefit of undoing the past and current abuses of Title IX, as well as preventing future abuses of other civil rights law.

Passing the Civil Rights Uniformity Act would ensure that unelected bureaucrats and judges would not get to unilaterally reshape policy affecting women and girls. It would allow schools to continue providing separate bathroom and locker room facilities and sports teams based on biological sex, not gender identity.

It also would address other unilateral Obama-era “gender identity” reinterpretations in health care, emergency shelters, housing, and employment. At the same time, such legislation would properly leave states and private entities entirely free to provide nuanced, sensitive, and reasonable accommodations of people who identify as transgender.

Up until last year’s prime-time interview of the celebrity then known as Bruce Jenner, few Americans ever had had a conversation about transgender issues. It’s a conversation we need to have.

But the Obama administration tried to shut down these discussions before they’ve even begun. The Obama administration attempted to force a one-size-fits-all policy on the entire nation rather than allow parents and teachers and local schools the time, space, and flexibility to find solutions that work best for everyone.

The Trump administration has taken the first steps to correct this.

While the Obama administration attempted to rewrite law to impose a federal “gender identity” policy on the entire nation, the Trump administration is respecting federalism, local decision-making, and parental authority in education.

For most Americans, concerns related to transgender students are a new reality. Rather than follow the Obama administration’s rush to impose a top-down solution on the entire country, the Trump administration is allowing the American people to have these conversations, consider all the relevant concerns, and make policies that will best serve all Americans.

This commentary has been updated to reflect news developments.