A National Mask Mandate Isn’t Necessary to Save Lives 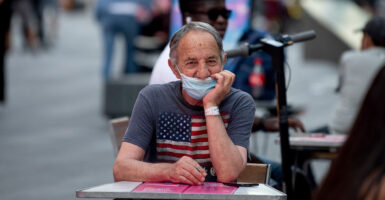 A man wearing a mask below his nose sits at an outdoor table in Times Square as New York City continues Phase 4 of reopening following restrictions imposed to slow the spread of the coronavirus Aug. 8. The fourth phase allows outdoor arts and entertainment, sporting events without fans, and media production. (Photo: Alexi Rosenfeld/Getty Images)

“Every single American should be wearing a mask when they’re outside for the next three months at a minimum,” said former Vice President Joe Biden at a recent press briefing.

“Outside” encompasses a lot, including places where a mask would have exactly zero effect. Normally, this kind of rhetoric is a merely simplified admonition to wear masks generally, but in this press briefing, Biden also endorsed a nationwide mask-wearing mandate, adding this gloomy justification: “The estimates by the experts are it will save over 40,000 lives in the next three months.”

More on that estimate in a moment. But first: Would such a mandate even be a good idea?

In short, no. The primary purpose of the broad masking guidelines is to reduce the transmission of the virus among asymptomatic or pre-symptomatic persons who do not know they are infected but are already contagious.

We ask everybody to wear a mask where close contact with others is unavoidable because there is virtually no way to tell if a person needs it. Having everyone wear a mask is the only way to cover every potential spreader.

But we do not ask everyone to wear a mask all the time. A person who is contagious, even symptomatically so, would pose zero risk to anyone else when standing alone in an empty field, or more realistically, in the parking lot between a car and the grocery store, or simply on the sidewalk.

The recommendation to wear a mask comes from clinical experience and common sense. Surgeons wear masks during procedures not to protect the surgeon but to prevent the surgeon’s respirations from contaminating the field. For the same reason, patients with COVID-19 or similar diseases are masked when being transported through a hospital.

So what does the science say? There is tremendous research showing that mask usage is associated with fewer infections, and this makes sense because respiratory illnesses are transmitted via our respirations.

Therefore, if we put a physical barrier in front of our respiratory orifices, it will decrease the speed and spread of our potentially infectious respiratory droplets or aerosols.

But every single study shows that masks are not a panacea. They are a lightweight solution that comes at very little cost to the individual and serve as an adjunct to other safety precautions, such as hand-washing, distancing, and minimizing unnecessary close contacts.

Regarding that claim about saving 40,000 lives, Biden presumably is referring to this statistical analysis that models the effects of various mitigation policies. It estimates that between 17,000 to 55,000 lives could have been saved if employees nationwide were required to wear masks between April and May.

The problem with Biden’s claim then should be obvious. Requiring employees to be masked is not the same as requiring all Americans to be masked, and the situation in April and May is significantly different from the situation now.

For one thing, masks are much more accepted now than they were before. And secondly, the infection has already spread through all or nearly all major cities in America—which means population immunity, although not yet at herd immunity levels, is going to be much greater than it was in April.

Thus, universal masking now will not have the same impact as it may have had earlier.

Now, masking is still helpful—and again, a prudent step to take when needed. But it is impossible to say that without a national mask mandate and its requisite enforcement, 40,000 Americans would be lost. Stating so amounts to reprehensible fear-mongering.

That’s one reason politicians shouldn’t be trying to politicize mask-wearing with mandates—and calling for heavy-handed solutions they know are impossible, backed by outlandish claims they know are misleading. It compromises public trust and diverts us from doing the right thing.

Americans, by and large, are generous, caring people. We need to trust them to care for themselves and their loved ones by wearing masks when social distancing is not possible.

As President Donald Trump has said, it’s the patriotic thing to do.

Originally published by The Press of Atlantic City