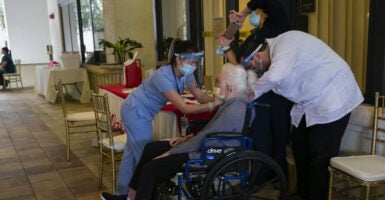 A resident gets a shot of COVID-19 vaccine Tuesday while someone takes photos with a smartphone at The Palace, an independent living community for seniors at Coral Gables, Florida. (Photo: Eva Marie Uzcategui Trinkl/Anadolu Agency/Getty Images)

The Dakotas stand above all other states in administering the COVID-19 vaccine to residents, while Arkansas has done the worst job, according to an analysis of federal data by a Heritage Foundation health policy expert.

Only 11 states have used more than half the doses provided by the federal government, the analysis shows.

The analysis by Edmund Haislmaier, senior research fellow in health policy at The Heritage Foundation, is based on data from the Centers for Disease Control and Prevention. That data measures the number of doses of the COVID-19 vaccine that the federal government distributed to states, compared with how many doses states have administered so far.

The result largely has been a matter of competence and organization, Haislmaier said.

“Some states were just better prepared for the vaccine when it gets down to individual states and how it was dispersed to the population,” Haislmaier told The Daily Signal in a phone interview. “While we were all waiting for the vaccine, states had time to plan to be ready.”

The federal government distributed doses of two approved vaccines to states based on population size, and state governments were responsible for administering the shots.

The Centers for Disease Control and Prevention, or CDC, has raw numbers, including doses given per 100,000 population. But a more “relevant metric” in measuring how well states are doing is to look at how much of the vaccine a state administers, Haislmaier said.

Importantly, he said, CDC updates the numbers daily, but some lag time on the data likely occurs.

Health and Human Services Secretary Alex Azar was critical of states Tuesday for micromanaging delivery of the COVID-19 vaccines while calling for giving shots to anyone 65 and older.

“Every vaccine dose that is sitting in a warehouse rather than going into an arm could mean one more life lost and one more hospital bed occupied,” Azar said during a press conference, noting that some states have been effective in delivering the vaccine to citizens.

The federal government distributed 53,525 doses to North Dakota. The state has used 38,868 doses, or 73% of what it had. Neighboring South Dakota follows closely, administering 70% of its doses.

West Virginia and Connecticut each administered 60% of their allotted doses.

Azar specifically praised those two states for moving aggressively to vaccinate their populations. Others aren’t doing so well, he said:

Some states’ heavy-handed micromanagement of this process has stood in the way of vaccines reaching a broader swath of the vulnerable population more quickly. We are telling states they should open up vaccinations to all people 65 and over and all people under 65 with a comorbidity, with some form of medical documentation as defined by governors.

States that administered at least 50% of their vaccine doses include Montana, Colorado, Tennessee, Maine, New Hampshire, and Nebraska.

Although the state of New York is storied for Gov. Andrew Cuomo’s perceived mismanagement of the COVID-19 pandemic, the state actually administered 41% of its supply, according to Haislmaier’s analysis—placing it in the middle.

“New York’s complaints have been more about being too rigid in the criteria [for who takes priority in getting a shot], and they had to throw away vaccines,” Haislmaier said. “The governor says, ‘Give us more vaccines, it’s the feds’ fault.’ No. That’s not the problem if you are using 50% or less of your supply.”

Florida, generally viewed as handling the broader impact of COVID-19 far better than New York in controlling the spread and number of deaths within a larger population, has used only 38% of its vaccine supply, according to the analysis.

Pfizer and Moderna developed vaccines against the novel coronavirus under the federal government’s Operation Warp Speed, which encouraged rapid research and approvals.

The winter has seen a surge in COVID-19 cases, and the United States has logged more than 386,000 deaths since the virus that causes the disease first emerged in Wuhan, China.

In addition to expanding availability of the vaccines to those 65 and older, Azar announced that HHS is telling states to expand channels for administering the vaccines from hospitals to include pharmacies, community health centers, and mass vaccination centers.

He said the federal government is releasing the entire available supply for order by states, rather than holding enough for required second doses in physical reserve.

Azar didn’t name states doing a poor job of getting the vaccine to individuals. However, the Centers for Disease Control and Prevention measures distribution and administering of the vaccine.

According to the CDC, the Northern Mariana Islands has administered more vaccine doses per 100,000 population than any other U.S. jurisdiction. South Dakota leads the way among states, followed by West Virginia, North Dakota, Alaska, and Connecticut. The District of Columbia ranks just ahead of Connecticut.

States and territories lagging behind in administering doses per 100,000 in population include the Virgin Islands, Marshall Islands, Georgia, Arkansas, South Carolina, Alabama, Mississippi, and Arizona, the CDC says.

“The whole country has done a terrible job,” Hammond told The Daily Signal in a phone interview. “It is amazing that we can’t move it as fast as it is being produced. A lot of people assumed that Pfizer and Moderna couldn’t keep up with demand. It turns out states can’t keep up with supply.”

Under the Trump administration’s Operation Warp Speed, the federal government distributes vaccines to states, the District, and territories based on population. Their governments are in charge of administering the vaccine.

“We would rather have some lower-priority individuals get vaccinated along with the high-priority individuals if it makes it go fast and it avoids vaccines sitting on the shelves and, for the love of God, not having that vaccine actually wasted or thrown away because of a failure to administer,” Azar said during the press conference.

The vaccines, given in two doses, must be stored in subzero temperatures.

Other state bottlenecks have resulted from poor data collection and reporting, and an unwillingness to expand vaccination from hospitals to pharmacies, Azar said.

Despite such scolding, the HHS secretary noted that the number of vaccinations is growing:

Over the last several days, we averaged around 700,000 reported vaccinations each day and we are on track to hit 1 million per day in a week to 10 days’ time. We have 9 million first vaccinations given, far more than any Western country. By the end of next week, 95% of long-term care facilities will have had their first visit with vaccine doses. All of this means it’s time to move onto the next phase of the vaccination campaign.

The goal now is maximum execution of vaccine delivery to Americans, said Army Gen. Gustave F. Perna, who has led the mobilization for Operation Warp Speed.

“That is how we are managing the second doses to ensure, first and foremost, it is always available,” Perna told reporters. “But second, we assure the maximum amount of available vaccines are available to the American people every day.”