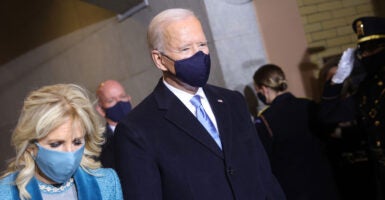 When Joe Biden becomes president on Wednesday, he won’t waste any time in fanning the flames of division in the United States as he seeks to implement his far-left agenda.

All signals are flashing red, indicating that the incoming administration will govern in both radical poetry and radical prose.

That should make us worry that all his promises to govern not as a partisan, but as an American, will evaporate as the country suffers from an imminent top-down takeover imposed by liberal elites.

Biden has circulated a memo that lays out his immediate agenda. That agenda is a clear indication of how far left he plans to take our country and reward his far-left supporters.

For the leftist environmental lobby, Biden is expected to immediately rejoin the Paris climate accord. That will be cheered by environmental alarmists and those who envision a world with the United States subservient to international organizations as their preferred model.

The Paris Agreement was—and always has been—a sham. And it’s an expensive sham for Americans, projected to cost 400,000 jobs, an average income loss of more than $20,000 for families of four, and a $2.5 trillion hit to the nation’s gross domestic product.

And to make matters worse, the agreement doesn’t even accomplish what it sets out to do, as Nick Loris of The Heritage Foundation wrote:

The original hope that each nation’s contribution might somehow push other countries to ‘do more’ is not playing out.

This deal was a hodgepodge of arbitrarily defined commitments with no enforcement mechanism. It was doomed from the start.

In short, environmental alarmists will cheer and Americans will lose.

Biden also will trade national security for political correctness as he plans to undo the Trump administration’s travel restrictions on countries that have heightened terrorism concerns and inadequate vetting procedures.

The resounding success of the tough-on-terrorism policies has made us safer over the past four years.

The left was apoplectic when Trump announced those restrictions early in his term. It labeled the restrictions as a “Muslim Ban” despite the fact that it applied to non-majority-Muslim countries and made no distinction based on the religion of the traveler.

Nonetheless, this apocryphal understanding of the policy has long galvanized the woke. So, as a result, Biden not only will be opening our southern border to millions of illegal immigrants, but will also open the travel gates to those we can’t be sure are coming to the U.S. with good intentions.

Vice President-to-be Kamala Harris recently appeared on Univision, one of the largest Spanish-language news channels, to lay out the administration’s legislative agenda, which includes amnesty for more than 10 million illegal aliens.

Caravans of would-be illegal aliens are already barreling toward the southern border, with the timing being negotiated in public by the incoming administration.

Many of the Biden administration initiatives will be carried out by the Department of Homeland Security, including mass administrative amnesties. Biden likely also will tell the Border Patrol and Immigration and Customs Enforcement to stand down and not do their jobs.

While our doors are wide open, the Biden administration will seek to clear the road to amnesty for those already within the country.

The new administration also will intervene in contractual relationships between landlords and tenants with actions to prevent evictions and foreclosures.

This is a solution in search of a problem, as rent payment rates haven’t significantly decreased. As Heritage scholars noted, the decrease in on-time rental payments in July 2020 was down only slightly from the year before, from 79.7% to 77.4%.

Biden also plans to take the first step toward the left’s long-term goal of total student loan forgiveness He is expected to begin that effort by pausing all student loan payments and interest for the foreseeable future.

Student loan forgiveness is a regressive policy that hurts American workers who have to foot the bill for those who chose a different education path.

Currently, “the top fifth of households holds $3 in student loans for every $1 held by the bottom fifth.” At the same time, those with the higher levels of debt (exceeding $50,000) “almost exclusively have bachelor’s degrees.”

Student loan forgiveness is a backward approach to fixing the crisis in higher education.

The federal government should be dramatically reducing its role in the student loan business. Guaranteed student loans mean that higher-education providers—which are usually factories of liberal advocacy—have no financial reason to tailor education to best economic outcomes.

It would be a victory for critical race theory and gender studies professors, but a raw deal for the rest of the country.

Biden also will attempt to usurp state and local authority with the imposition of a nationwide mask mandate.

No president has ever sought to use federal authority on interstate travel to dictate personal garment choice. Establishing such a precedent will no doubt have long-term ramifications on life, liberty, and the role of the government in our daily lives.

Finally, the Biden administration obviously owes a lot to the cultural left. To reward the left, Biden will pick up where former President Barack Obama left off, forcing schools to allow biological boys back in girls’ locker rooms and into women’s sports.

Biden will also reopen military service to individuals undergoing medical gender transitions even though gender dysphoria is a recognized health risk and our military has a long history of disqualifying applicants for service based on health conditions such as asthma, plantar warts, or a variety of anxiety disorders.

Both are clear priorities of the far left that override common sense and can inflict untold damage on our nation’s youth.

And all of this is just some of what’s expected on Biden’s first day in office. The following days, weeks, months, and years will involve far-left priorities pushed by an ever-growing federal government.

The insincere calls for unity will be overtaken by these divisive actions by an administration seeking to rule with federal force for radical ends.

Despite all that, there’s not time for despair. As Heritage Foundation President Kay Coles James said on Monday, “to the conservative movement I would say: Our time is now. We have to be the watchmen upon the walls of liberty and freedom. It’s time for us to stand, stand firm, stand tall, and fight for the things that we believe in.”