Q&A: Everything You Need to Know About Trump ‘Travel Ban’ Oral Arguments 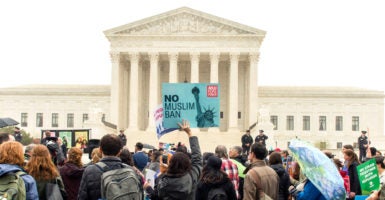 Protesters gather on the street outside the U.S. Supreme Court as arguments in the Trump administration's "travel ban" case, Trump v. Hawaii, are heard by the nine justices. (Photo: Brian Cahn/ZUMA Press/Newscom)

The U.S. Supreme Court heard oral arguments Wednesday for Trump v. Hawaii, one of the biggest legal cases of the year. The case dates back to the early days of the Trump administration, when a group of states, led by Hawaii, challenged President Donald Trump’s so-called “Muslim ban.” The “ban” had the effect of limiting travel to the U.S. by people from seven Muslim-majority countries that the Trump administration determined were either official state sponsors of terrorism, or terrorist safe havens. Hans von Spakovsky, a senior legal fellow at The Heritage Foundation, attended Wednesday’s oral arguments and spoke about what happened inside the courtroom directly afterward with The Daily Signal. A lightly edited transcript is below.

Kelsey Harkness: You just walked out of the Supreme Court for one of the biggest cases, if not the biggest case of the year—the so-called Trump travel ban. Remind our viewers, how did we get here?

Hans von Spakovsky: This was the last case of the Supreme Court’s term that was argued today. It was a packed courtroom. I didn’t see a single empty seat. There were a lot of the Washington elites, people that folks see on the news in there, including the White House counsel, Don McGahn. There were lots of protesters outside, too.

This case is about the fact—remember the president issues an executive order. We’re now in the third revised version of it, that said that we are going to restrict the entry from certain countries, basically terrorist safe havens, until we are sure that we have the kind of vetting procedures in place that will prevent terrorists and other folks who are a national security threat from getting into the United States. Courts all over the country, including a Hawaii district court, issued an injunction saying, “The president can’t do that.”

Harkness: Tell us what happened inside the court today.

von Spakovsky: It was really interesting because I think the government had the better of the argument. Some of the claims being made by the challengers were so extreme, that they boarded on the absurd. I’ll give you an example of what I mean.

This whole case revolves around one particular part of the immigration law. It’s a very simple statute. … It’s very short, unlike a lot of federal laws. It simply says that the president can suspend the entry of any aliens, or any class of aliens, if he believes their entry will be detrimental to the United States.

Now, that’s a very broad provision. It gives the president almost unlimited authority to keep particular aliens out of the country. When the lawyer for the challenger in this case was asked about that statue, and its simple text, he basically said, “This is such a sweeping power, that you the court, you really need to read some kind of restriction into it.”

He basically was telling the court that they ought to create some kind of restriction on the president that isn’t in the statute, and isn’t in what Congress did when it gave the president this power. That and other things in the case seem to indicate to me that I think the government is probably going to win. I think there’s even a chance they might, possibly, get at least one of the liberal justices, Elena Kagan. [She] actually asked some pretty tough questions of the challengers in the case.

Harkness: Changing something in the statute like that sounds like something that Congress would do, not the Supreme Court.

von Spakovsky: That’s exactly right. The other argument that I think shows people the absurdity of these claims is that, there’s great discussion in there about supposedly the anti-Muslim statements that have been made by the president, particularly during the campaign.

This has been referred to as a so-called “Muslim ban.” In fact, that’s what most of the signs from the protesters said. As Justice [Samuel] Alito pointed out, first of all, only five of the current seven countries that are in the ban are Muslim. There are at least 50 countries in the world with a majority-Muslim population. These countries represent only about 8 percent of the Muslim population in the world.

As Noel Francisco, the solicitor general of the United States, said, “If this was supposed to be a Muslim ban, then it was probably the most ineffective [ban] possible.” It clearly is not a Muslim ban, it’s based on the fact that the countries targeted are all either official state sponsors of terrorism, or terrorist safe havens where we can’t trust the information we’re getting from those governments when we are checking the backgrounds of people who want to enter from those countries.

Harkness: Now, I know the state of Hawaii is trying to use comments that Trump actually made on the campaign regarding Muslims, and apply those comments to the context of the so-called Muslim ban. How did that conversation play out?

von Spakovsky: Well, in fact, there was a lot of questioning about that. The position that the government took was … First of all, he didn’t really concede that he made anti-Muslim statements. But, the point the government made was, “Even if he had, that was when he was a private individual. It was only once he took the oath of office, and came in, that you should pay attention to what he says.”

At one point—very interesting—the chief justice asked the lawyer for one the challengers, he said, “Are you saying that if the president issues a proclamation tomorrow saying, ‘I apologize for any prior statements I made, and I certainly didn’t in any way mean to say that I had anything against Muslims.’ And then the very next day issued this very same executive order, would this executive order then be OK? And would you not be in our courtroom today?”

The lawyer for the plaintiffs actually admitted, yes, they wouldn’t be there.

von Spakovsky: That is telling. During his rebuttal at the very end of the argument the solicitor general, Noel Francisco, got up and said, “In response to what my brother counsel said, I would point out the president, actually on Sept. 25, said that he had not meant to say anything against Muslims. He regretted if anybody has misinterpreted that—that the Muslim religion is one of the greatest religions in the world.”

It sounded like the president had already done what the plaintiff said would basically negate the case.

Harkness: It’s interesting you said that one of the more liberal-leaning justices, you think, might side with the government in this case. But, so often, when it comes to Supreme Court cases, the justice we’re paying attention to is swing vote Anthony Kennedy. What were his questions like?

von Spakovsky: Anthony Kennedy actually asked questions of both sides. If I had to guess, I would tend to think that he was probably leaning towards the government because, again, it all boiled down to this one very short federal statute. Under which the president is operating.

The other problem with the case of the challengers is that—and this came up during the arguments—is they’re asking the court, judges, to review the national security judgements of the president. You know, judges who don’t have access to all the kind of intelligence information coming in from the CIA, the [National Security Agency], that the president does. I think, it seemed to me, that many of the justices are uncomfortable at the idea that they would sit in judgment of the national security decisions of the president.

Harkness: Very briefly, what were the protests like outside?

von Spakovsky: There were a fair number of protesters who were being rained on, because it’s not a nice day in Washington. Most of the signs they were holding up had to do with the supposed Muslim ban in this order. Well, like I said, it’s not a Muslim ban. No one reading the actual text of the executive order, the proclamation that’s an issue, could possibly conclude that it’s a Muslim ban.

I think the protesters are there on an issue that is just not … It doesn’t exist in the case.

Harkness: Finally, when can we expect a decision to come down?

von Spakovsky: We don’t know when the decision will come down. But, we know it will come down before the end of June. The end of June is when the Supreme Court officially ends its term, and the justices go off for their summer vacations. I suspect we probably won’t get this decision until the very last day.

Harkness: Thank you so much for joining us.