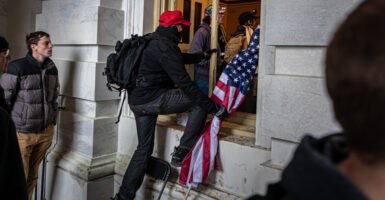 Prosecutors so far have brought federal criminal charges, including unlawful entry and assault, against 55 people for participating in the riot Wednesday at the Capitol.

Michael Sherwin, acting U.S. attorney for the District of Columbia, said “everything is on the table” several times Thursday during a conference call with reporters.

“We will bring maximum charges based on the conduct,” he said.

“Like all Americans, I am outraged by the violence, lawlessness, and mayhem. I immediately deployed the National Guard and federal law enforcement to secure the building and expel the intruders,” Trump said, adding:

America is and must always be a nation of law and order. The demonstrators who infiltrated the Capitol have defiled the seat of American democracy. To those who engaged in the acts of violence and destruction, you do not represent our country. To those who broke the law, you will pay.

Trump, who early Thursday pledged an “orderly transition” to the next president despite disagreeing with the election results, said he had sought every legal avenue to “defend democracy.”

“A new administration will be inaugurated on Jan. 20,” Trump said, referring to the congressionally certified Electoral College victory for President-elect Joe Biden. “My focus now turns to ensuring a smooth, orderly, and seamless transition of power.”

The FBI is in charge of the investigation of the riot, Sherwin said, but other law enforcement agencies are involved.

What started as a peaceful protest in which tens of thousands participated in the “March for Trump” turned into a riot when dozens, if not hundreds, broke into the Capitol and overwhelmed Capitol Police.

The breach followed a “Save America Rally” just south of the White House, in which Trump and others spoke against allowing Congress to certify the Electoral College vote in favor of Biden, Trump’s Democratic challenger.

Sund, a member of the Metropolitan Police Department for more than 25 years, joined Capitol Police as an assistant chief in 2017 and has been chief since June 2019, according to published reports.

The Hill reported that McConnell demanded and accepted the resignation of Senate Sergeant-at-Arms Michael Stenger, whom Senate Minority Leader Chuck Schumer, D-N.Y., had said should resign or be fired.

A reporter asked Sherwin whether any charges could be brought against Trump; his son Donald Trump Jr.; Trump lawyer Rudy Giuliani; and other supporters who spoke at the rally that preceded the violence at the Capitol.

“Right now, we are trying to deal with the closest alligators to the boat,” the U.S. attorney responded. “We are looking at all actors here, and all options are on the table. … Anyone that had a role, if the evidence fits the elements of a crime, they’re going to be charged.”

Capitol Police, a federal agency, reported the arrests of five men and one woman Wednesday for unlawful entry–three from Florida and one each from Illinois, New Jersey, and Virginia.

D.C. police reported that 56 of their officers were injured and two were hospitalized.  Four people died during the riot.

Ashli Babbit, 35, of Huntingtown, Maryland, was fatally shot by a Capitol Police officer. A video at the time of the shooting appears to show her trying to climb through a broken window inside the Capitol.

KUSI-TV in San Diego on Wednesday identified Babbit as a 14-year Air Force veteran and married mother of four, who the station said lived in the San Diego area. Huntingtown, the address given by police, is about 35 miles southeast of Washington.

The other three died outside the Capitol from medical issues, D.C. police said, and were identified as Rosanne Boyland, 34, of Kennesaw, Georgia; Kevin Greeson, 55, of Athens, Alabama; and Benjamin Phillips, 50, of Ringtown, Pennsylvania.

“How could a joint session of Congress [meet] with the vice president in the building, and they not do better than this? Where were the National Guard?” Graham said, adding:

What kind of intelligence-gathering apparatus does the [U.S. Capitol Police] and the agencies in charge of defending the Capitol have? How could they fail so miserably 20 years after 9/11?

Sund, the Capitol Police chief, said in a public statement Thursday that his officers and others “responded valiantly when faced with thousands of individuals involved in violent riotous actions.”

“These individuals actively attacked United States Capitol Police officers and other uniformed law enforcement officers with metal pipes, discharged chemical irritants, and took up other weapons against our officers,” Sund said. “They were determined to enter into the Capitol Building by causing great damage.”

But make no mistake–these mass riots were not First Amendment activities; they were criminal riotous behavior. The actions of the USCP officers were heroic given the situation they faced …

Capitol Police, Sund added, are “conducting a thorough review of this incident, security planning and policies and procedures.”

In his conference call with reporters, Sherwin declined to address Capitol Police preparedness. He noted that his office worked in advance to plan for the pro-Trump rally and march  with the D.C. government.

However, D.C. Mayor Muriel Bowser, in a letter Tuesday to federal officials, opposed any federal assistance for the events scheduled Wednesday.

“To be clear, the District of Columbia is not requesting other federal law enforcement personnel and discourages any additional deployment without immediate notification to, and consultation with, MPD if such plans are underway,” Bowser wrote to acting U.S. Attorney General Jeffrey Rosen, acting Defense Secretary Chris Miller, and Secretary of the Army Ryan D. McCarthy.

“The District of Columbia Government has not requested personnel from any other federal law enforcement agencies,” Bowser wrote. “To avoid confusion, we ask that any request for additional assistance be coordinated using the same process and procedures.”

Bowser imposed a curfew from 6 p.m. Wednesday to 6 a.m. Thursday. She later extended a public emergency order for a total of 15 days through Inauguration Day on Jan. 20, giving her the ability to impose a curfew at any time.