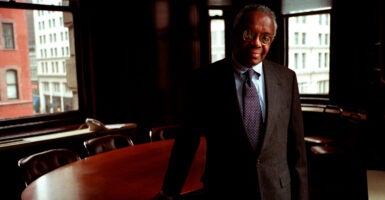 Derrick Bell, the first tenured African-American professor of law at Harvard University, seen here in an undated photo, is widely cited as the originator of Critical Race Theory. Bell died in October 2011 at the age of 80. (Photo: Neville Elder/Corbis/Getty Images)

Critical race theory is fast becoming part of classroom curriculums and the larger culture in general.

The Heritage Foundation recently hosted a panel discussion breaking down what critical race theory is and why it poses a threat. The event features insights from several Heritage scholars and policy experts.

On today’s podcast, we share the audio from the event, “The New Intolerance: Critical Race Theory and Its Grip on America.”