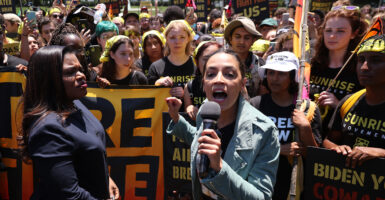 Both chambers of Congress are focused on a raging debate over whether to pass a 2,465-page, $3.5 trillion tax-and-spend bill. With the legislation almost guaranteed to have no Republican support, different factions of Democrats are locking horns over the bill’s fate.

Progressives want to spend recklessly, which is much easier to do when you’re using other people’s money. In contrast, moderates are alarmed about what effect yet another federal spending blowout would have on already-high inflation and the dangerously huge national debt.

A key component of the bill is enacting a “Green New Deal” agenda, which is a top priority for left-wing activists.

The energy and environmental sections would spend hundreds of billions on a massive scheme that would only affect global temperatures by about 0.04 degrees Celsius in 2100.

Rather than delivering tangible environmental benefits, the bill would do far more to centralize power and control over the daily lives of Americans in Washington and provide handouts to political pet causes and special interest groups.

These nine items are just a sampling of the “green” insanity in the bill.

Colleges and universities across the country are already awash in “ethnic studies” programs that primarily serve as a factory for producing left-wing activists.

Section 136601 of the spending bill would spend $10 billion on creating something similar for the environmentalist movement, calling for funding “environmental justice” programs in higher education.

There are many ways to describe efforts to address things like pollution. Using the word “justice” is explicitly designed to dovetail with left-wing social movements rather than having a focus on hard science or public health.

This $10 billion would be taxpayer-funded seed money for a new army of political activists.

Upon graduation, recipients of environmental justice degrees would need to find jobs. That’s where the multiple “civilian climate corps” programs scattered across the bill come in.

Pages 7, 19, 925, and 965 would dedicate $8.1 billion toward paying environmentally minded people to work at federal parks and forests, along with Native American areas, on a broadly defined set of projects.

This would, of course, be layered on top of billions of dollars of programs for federal lands and forests elsewhere in the bill, and on top of tens of billions in regular spending every year.

As with the environmental justice subsidy, it would be easy to use neutral terms such as “conservation” that have appeal across the political spectrum. Naming the program “climate corps” is a purely ideological decision, showing that the program is primarily designed to benefit the left.

3. Huge Handouts for the Rich to Buy Fancy Electric Vehicles

The “Green Energy” subtitle, starting on page 1695, would throw $279 billion in tax subsidies at a range of predictable things: unreliable wind and solar energy projects, cost-ineffective biofuels like ethanol, and an “environmental justice” bonus depending on where things are built.

The most galling aspect of this massive exercise in corporate welfare and economic micromanagement is Section 136401, which provides tax credits toward the purchase of electric vehicles.

While much of the rhetoric surrounding the bill revolves around socialist notions of “economic justice,” the details in this section show that Democrats have no problem cutting checks to the wealthy. Existing tax credits for these vehicles go overwhelmingly to households making over $100,000 per year.

Working-class families are unlikely to purchase a $55,000 sedan or a $74,000 truck. Yet vehicles costing that much are eligible for the tax credit. Similarly, households earning up to $800,000 qualify for the credit.

It’s hard to square this upper-class welfare with “economic justice.”

When it’s not lavishing billions in tax subsidies on the top 5%, the bill does make some awkward attempts at applying the nebulous concept of “equity” to new environmental programs.

Section 11003 would use $3 billion to “increase community tree canopy,” which is a legalistic way of saying they want rural and suburban areas to pay for planting trees in cities.

Section 30443 would dedicate $1 billion for “electric vehicle charging equity,” which is a way of acknowledging the concentration of electric vehicle use among high-income households.

This is yet another example of using left-wing buzzwords to dress up the Democrats’ agenda.

5. $85 Million on Climate and Pregnant ‘Individuals’

Yet another example of the spending bill bowing to radical activists comes in Section 31046.

At first glance it is one of many provisions promoting the Green New Deal agenda, in this case throwing $85 million at research seeking to identify whether climate affects pregnancy. Note that this is not an attempt to remedy problems that are known to exist, but rather an attempt to find problems that would then generate more support for the agenda.

The section proceeds to go off the deep end with its choice of words: “pregnant, lactating, and postpartum individuals.” Erasing women from the context of pregnancy and motherhood is a promotion of the most extreme elements of the transgender movement and has no business becoming part of federal law.

The spending package includes a subtitle on wildlife conservation. It provides special attention to a select handful of creatures, meaning that some animals are more equal than others.

Section 70607 would spend $25 million to conserve species of “desert fish.”

Section 70605 would similarly dedicate $25 million for “pollinators,” or bees. Incredibly, this is the second earmark for bees this year, with the bipartisan infrastructure bill drizzling $10 million their way in a package that’s supposedly focused on roads and bridges.

Page 1060 sends $20 million to the Department of Energy’s Office of Economic Impact and Diversity, which currently receives $10 million per year. Tipping the cap to the bill’s core audience, the legislation labels this as “diversity support.”

Section 30204 would create a $5 billion slush fund for the Environmental Protection Agency to pursue left-wing goals. On top of the $5 billion, the agency would receive $500 million to pay bureaucrats to run the program. The goals, which repeatedly reference “disadvantaged communities,” are nebulous enough that the bureaucrats will have nearly free rein to use the billions as they see fit.

The $3.5 trillion legislative package is so massive that these eight items are just the beginning. There are many more examples of wasteful and problematic provisions in the bill, which is why Congress should scrap it altogether rather than trying to force it through.