Even Some Democrats Sound Alarm on Radical $3.5 Trillion Spending Bill 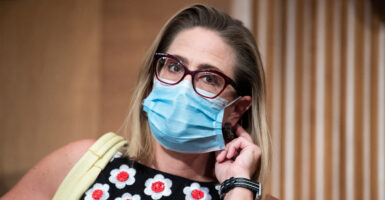 Sen. Kyrsten Sinema, D-Ariz., seen here at a Senate committee markup at the Capitol on Aug. 4, has raised red flags about the gigantic $3.5 trillion spending bill most of her fellow Democrats are pushing. (Photo: Tom Williams/CQ-Roll Call/Getty Images)

Despite already spending trillions of dollars on COVID-19 relief legislation, for the past few months, Democrats have been focused on designing the largest tax-and-spend bill in U.S. history.

As the House and Senate move the legislation through at freight-train speed, troubling details about the plan have emerged. All Americans should be concerned about Democrats’ plans for amnesty for illegal immigrants, job-killing tax hikes, and a spending surge that threatens to cause both runaway inflation and dangerously high debt.

The situation is so dire, a growing chorus of moderate Democrats are pushing back against both the radical nature of the legislation and the way it’s being railroaded through by leadership.

In July, Sen. Kyrsten Sinema, D-Ariz., announced that she was uncomfortable with the size and scope of the package. She’s right to be worried. At $3.5 trillion, this bill would cost every household in the country more than $27,000.

On Sept. 2, Sen. Joe Manchin, D-W.Va., wrote a commentary piece for The Wall Street Journal to voice his own reservations. He also cited the amount of spending, especially in light of massive COVID-19 spending.

It’s worth remembering that all of this new spending would be in addition to more than $5 trillion that was passed in the wake of the COVID-19 pandemic, and the more than $1 trillion for infrastructure likely to pass later this month.

In total, Congress and the administration stand to spend more than $9 trillion in less than 12 months. Apart from the many policy flaws of those spending bills, that’s an enormous amount of money.

Pumping so much cash into the economy in such a short period of time has several consequences, one of which has been a dramatic surge of price inflation. Manchin rightly noted that passing the $3.5 trillion mega-package could threaten to send inflation spiraling out of control.

Another one of Manchin’s concerns is the expectation that the new spending bill will add between $1 trillion and $2 trillion to the national debt. With the debt currently at $28.4 trillion, or more than $220,000 per household, blindly adding more to the national credit card would be dangerous for America’s future.

Other Democratic moderates, including Reps. Stephanie Murphy of Florida and Henry Cuellar of Texas, echoed those concerns about the debt in a letter to House Speaker Nancy Pelosi, D-Calif., where they requested that the bill not add to the debt.

Avoiding a debt increase would make the current package dramatically more difficult to pass. That’s because there is no realistic way to cover $3.5 trillion in spending while limiting the taxes to high-income households and businesses.

Another problem that Murphy and Cuellar noted is the breakneck speed at which the proposal is being produced. They requested that House members have at least 72 hours to review legislation prior to a vote.

With the bill already over 2,400 pages long, this means that even with 72 hours they would still need to read 34 pages per hour with no breaks for sleeping.

It appears their strategy is to re-create Pelosi’s infamous 2010 comment about Obamacare; namely, that “we have to pass the bill so you can find out what is in it.”

Reckless speed can also lead to mistakes and misinformation.

House committees have only had a few weeks to compose and deliberate on their sections of the bill. At a hearing of the House Ways and Means Committee, Murphy raised concerns that the Congressional Budget Office hasn’t had time to estimate the cost of its provisions.

Technically, members of Congress have no idea how much all this legislation will really cost.  How is that being responsible?

So far, requests to prevent deficit increases and avoid rushing to meet arbitrary deadlines have gone nowhere. That’s because Pelosi is more concerned with appeasing far-left activists who aren’t satisfied with $3.5 trillion for their causes.

It remains to be seen whether moderate Democrats in the House and Senate will stick to their guns and oppose the spending package if it violates their commonsense requests.

One thing that’s clear already: The bill is bad news. It’s bad for the economy, bad for education, and bad for the rule of law.

Fortunately, there’s still time for Congress to back away and avoid the catastrophic consequences.