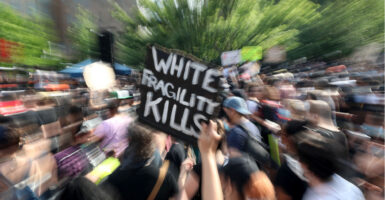 Ethnic studies teach minorities that they have a long list of grievances against the United States, and particularly against whites. Pictured: This sign, presumably a reference to Robin DiAngelo’s bestselling “White Fragility,” is seen during a protest over the death of George Floyd in New York City on June 6, 2020. (Photo: Tayfun Coskun/Anadolu Agency/Getty Images)

Pan-African studies are “the intellectual arm of the revolution,” the unrepentant communist Angela Davis triumphantly told students at California State University, Los Angeles, in a candid moment in 2016. Well, that arm got a lot longer this week.

The entire California State University system just announced Thursday that it was making ethnic and social justice studies mandatory for everyone who wants a degree.

Yes, that means that ethnic and social justice studies will now have pride of place along with English and science as subjects that must be mastered by those brandishing a bachelor’s degree from the vast California system.

Not that ethnic or social justice studies will do one iota to help these young Americans master their fields or become future leaders, which used to be one of the aims of what was formerly called higher education.

No, ethnic and social justice studies are political indoctrination.

Critics would say, hang on, wouldn’t ethnic and social justice studies help Americans get along better in a diverse workforce, body politics, classrooms, etc.? Those critics, of course, would have very little understanding of what actually is taught in ethnic studies or social justice studies.

Ethnic studies teach the members of what in today’s lexicon we call “minorities” (really, any American who belongs to a group that the activists have convinced the bureaucracy to officialize as marginalized) that they have a long list of grievances against the United States, and particularly against whites.

To Americans who have been cordoned off into the groups thought of as belonging to the “oppressor” classes, ethnic and social justice studies classes instruct them to forthwith act submissively, assume the burden of collective guilt for sins in which they have taken no part, listen, not talk, etc.

Who are these oppressor people? It used to be only white male Protestants, but we are seeing the anger turned against white women, who are now dismissed and cruelly disparaged as “Karens,” (anti-racist consultant Robin DiAngelo actually devotes an entire chapter of her bestseller “White Fragility” to “White Women’s Tears”), Jews, and, increasingly, Chinese and Indian Americans.

Why? Well because Chinese and Indian Americans have had the temerity to succeed, which destroys the narrative that we have oppressor and oppressed classes, and individuals cannot do anything about it.

So would anyone want to introduce this witches’ brew into the educational system of anything? Because Davis was right: Ethnic studies are a political project.

Ethnic and social justice studies are just one more attempt at demolishing the “hegemonic narrative.” The hegemonic narrative of this country, to those not yet indoctrinated, is the American way of life. It is the American dream. It is the promise of liberty and prosperity that has attracted more than 100 million immigrants to our shores in over a century and a half.

That attraction continues to this day. There is a very long line out the door of people seeking to come in and there is no line for people waiting to leave.

As I explain at length in my new book “The Plot to Change America: How Identity Politics is Dividing the Land of the Free,” to be published this Tuesday, the hard left wants to strangle this goose that laid the golden egg.

To the hard left, this is not a dream, but a dystopian nightmare of an America that is structurally, systemically, and institutionally racist. It is also too individualistic (and at the same time too family-centered), profit-driven, male-ist, etc.

To Davis and the others who understand the political value of ethnic studies, this awful American hegemonic narrative must be replaced with a counter-narrative filled with the aggrieved and the aggressors.

That is why every student who will go through the Cal State system will now receive these lessons, and be hugged more tightly by the intellectual arm of the revolution.