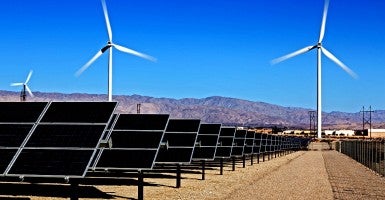 Proponents of energy subsides argue that they are necessary for any number of reasons, such as business certainty, to stimulate the economy, to preserve jobs, to combat global warming, to compete internationally, and the like.

But in the long run, subsidies actually hurt the very industries they’re supposed to help by disincentivizing innovation and making U.S. companies less competitive at home and abroad. The real irony, if not tragedy, is that a free market is far more likely to yield the growth and innovation that subsidy supporters claim to want. Each year, when Congress tries to extend, re-extend, or retroactively extend targeted tax credits for renewable energy, Congress hurts long-term innovation and growth.

Currently, Congress is using the omnibus spending bill or tax extenders package as a vehicle to do this once again. Some in Congress are revisiting the idea of extending the wind and renewable production tax credit (PTC) and the solar investment tax credit (ITC). In fact, the tax extenders bill extends the wind and renewable energy PTC to include projects that begin construction by Jan. 1, 2017.

But here are a few reasons why these carve-outs need to be permanently ended.

Camilo Patrignani, the CEO of solar energy company Greenwood Energy, has laid out a case for eliminating the solar investment tax credit, noting that solar power is getting more affordable and that “we must empower developers to be competitive without subsidies.”

Further, according to the Department of Commerce:

The United States is home to a thriving renewable energy industry, with globally competitive firms in all technology subsectors…just under $700 billion will be invested in the U.S. renewable energy sector during the next two decades with investment opportunities cascading across the industry’s deep and multi-faceted supply chain.

Proponents of energy subsides argue that an extension or a measured phase-out is necessary for “the policy certainty needed to continue scaling up and creating benefits” and to avoid a “policy cliff.” Using this argument, the wind and renewable production tax credit has been around since 1992 and renewed nine times. Congress has let it expire five times—that’s five opportunities to permanently eliminate a bad policy.

While some lobbyists will ask for another extension, what most are really asking for is that the “PTC/ITC … be extended as soon as possible for as long as possible,” according to the American Wind Energy Association.

Real certainty comes by getting rid of the subsidy altogether.

Industry pleas for “just one more year” may sound innocuous, if not reasonable, but that’s not the case.

President Barack Obama has touted policies attempting to increase solar and wind power as important to his global warming policy. But according to the National Academy of Science, eliminating the tax credits would increase greenhouse gas emissions by 0.3 percent. In fact, if the president were truly concerned about environmental impacts, he might consider that a very efficient wind farm would need 260 times the amount of land to produce the same amount of electricity as a typical nuclear power plant, which has virtually no emissions.