The Inequality of ‘Equity’ 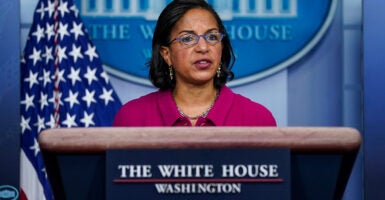 President Joe Biden took office pledging a return to unity and decency. A new era of good feelings is at hand, we were informed by both his administration and its sycophants in the media. A new world—a world of “equity”—is at hand.

Equity, you see, is the word of the day. Not equality—that would be a traditionally American concept.

The Declaration of Independence declares that “all men are created equal … endowed by their Creator with certain unalienable rights.” The 14th Amendment to the Constitution provides that all citizens must receive “equal protection of the laws.”

Equality, in the traditional understanding, means something simple and easy to implement: the protection of the rights of all individuals, along with the invasion of none of those rights.

Equity means something different. The two words are separated by one syllable—but that syllable represents the difference between justice and injustice, rights and infringements, individualism and tribalism. Equity, in the common political parlance, means that each group should receive the same outcome as every other group.

Ibram X. Kendi, the chief expositor of the new Democratic “racial equity” theory, explains that “Racial equity is when two or more racial groups are standing on a relatively equal footing.” Because race is a social construct, says Kendi, the chief indicator that two races are on unequal footing can be found not in proof of differential treatment by race but in differential outcome by race.

To prove racial inequity, therefore, one need not show animus or discriminatory policy. All one must show is unequal outcome. Kendi explains in his massive bestseller, “How to Be an Antiracist”:

And, says Kendi, “There is no such thing as a nonracist or race-neutral policy.” All policies either forward equity or oppose it. Any policy not explicitly designed to rectify unequal outcome is therefore racist.

This philosophy is both idiotic and perverse. It’s idiotic because all human groupings—literally all of them—will result in differential outcomes. Draw a line down the middle of any room in random fashion and the result will be unequal income distribution, criminal records, and educational histories.

This philosophy is perverse because it attributes malice to those who have none; it fosters policy that actively discriminates, supposedly in order to alleviate unproven discrimination.

Unfortunately, this idiotic and perverse philosophy has become the root of Biden administration policymaking. “Equity” has been used as the keyword from environmental to economic to COVID-19 policy.

Susan Rice, Biden’s domestic policy adviser, explained this week, “[W]e’re focused on racial justice and equity … It’s for everybody who has not had the benefits of a system that has not served everybody. … This is not about serving one group to the detriment of another.” This, of course, is a lie. It is utterly about group equality, which requires individual injustice.

America was rooted in equality and freedom. Equity requires freedom to be curbed. It’s therefore a national tragedy to watch equality of rights abandoned in favor of equity.