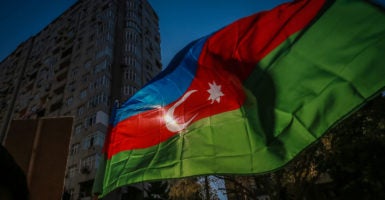 Azerbaijan has had significant advances in economic freedom, increasing 35.4 points, according to The Heritage Index of Economic Freedom, since 1995. (Photo: Pacific Press/ Contributor/Getty Images)

A recent report by the McKinsey Global Institute affirms that the recipe for wealth and prosperity encompasses economic freedom as its main ingredient.

As a vital component of human dignity and autonomy, economic freedom is valuable as an end in itself. Just as important, however, is the fact that economic freedom provides a proven pathway for economic progress and prosperity.

Advancing economic freedom is really about empowering individuals and enterprises through sound policies of market openness, regulatory efficiency, and limited government within the rule of law.

The McKinsey report’s “recent outperformer” countries, which are defined as having about 5% compound annual gross domestic product per-capita growth from 1996 to 2016, beat all other categories in terms of advancing economic freedom by a wide margin.

Since 1995, when The Heritage Foundation started measuring the entrepreneurial policy environments of countries around the world in its annual Index of Economic Freedom, the 11 McKinsey “recent outperformer” countries—Azerbaijan, Belarus, Cambodia, Ethiopia, India, Kazakhstan, Laos, Burma, Turkmenistan, Uzbekistan, and Vietnam—improved by about 16 points on average in economic freedom, with Azerbaijan improving the most at 35.4 points and Cambodia the least, although still positive by 5 points.

By contrast, McKinsey’s “underperformers” (50 years of very low economic growth) actually lost about 2 points of economic freedom on average over the history of Heritage’s index.

Economic freedom—cultivated by the rule of law, limited government, regulatory efficiency, and open markets—has proven to be critical for generating the broader-based economic growth that creates opportunities in all sectors of society.

On average, global economic freedom has risen measurably over the past 25 years. During that period, the world has recorded significant economic growth, and the prevalence of extreme poverty has been cut by two-thirds.

In opening the gates of prosperity to ever more people around the world, economic freedom has made the world a profoundly better place.

Perhaps more importantly, any discussion about advancing economic freedom is essentially a story of the empowerment of individuals and entrepreneur-owned companies.

As the McKinsey report notes:

Competition and contested leadership in the private sector are key features of these dynamic economies, with the best-performing companies subject to fierce competition at home.

McKinsey’s new report provides another nail in the coffin of socialism, which suppresses competition in the name of politically determined social and economic outcomes that—however idealistic and feel-good they might sound—in practice most often simply reinforce the status quo and the privileges of those in power.

Advancing economic freedom, by contrast, is the proven way to empower individuals at all levels of income and social standing, providing real opportunities for innovation and change.