Another Way Regulation Could Limit Economic Opportunity for Millions 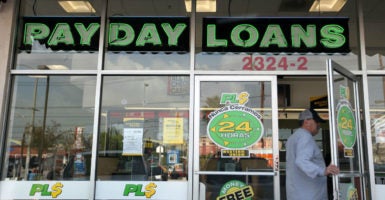 A new rule will shut down an estimated 85 percent of small-dollar loans made. (Photo: J. Emilio Flores/La Opinion/Newscom)

Yet again, the 2010 Dodd-Frank Act has spawned an out-of-touch regulation that could harm millions of Americans.

By capping interest rates at 36 percent for small-dollar loans, this rule makes it impossible for most lenders to continue providing the level of credit that they have in the past. The Consumer Financial Protection Bureau itself projects the new rule will shut down an estimated 85 percent of small-dollar loans made.

The American economy runs on credit. By limiting access to small-dollar loans, the CFPB is boxing out an entire class of Americans from the consumer credit market and thus the economy as a whole.

In fact, in September, Sen. David Vitter, R-La., keynoted a panel at The Heritage Foundation to discuss the impacts of this rule. One panelist, Dennis Shaul, CEO of Community Financial Services Association of America, who previously served as a senior adviser for former Rep. Barney Frank, D-Mass., expressed fears that the CFPB rule will hurt millions of consumers:

This harmful (if not discriminatory) regulation is the type of tone-deaf policy that has come to be expected from the CFPB. Regulators are drastically out of touch with the people they are supposed to protect.

Every year, 12 million Americans use just one form of small-dollar loans, namely payday lending. Yet the CFPB assumes that if these products are no longer available, the demand for short-term cheap credit will disappear. This simply isn’t true. Research shows that without traditional small-dollar loans, consumers turn to riskier, more expensive, and at times completely unregulated options like loan sharks.

Like with any business, small-dollar lenders will fail if their customers cannot pay them—hitting them with legal liability on top of losing a paying customer doesn’t help the lender or the borrower.

Despite criticism from Vitter and others, the Consumer Financial Protection Bureau insists its goal is to protect American consumers from abuses in the small-dollar loan industry.

But to ensure customers aren’t getting abused, the government should stop issuing out-of-touch regulations and let lenders and borrowers determine what products are right for them. The CFPB should foster competition in the credit market instead of unfairly limiting economic opportunity for an entire group of Americans.