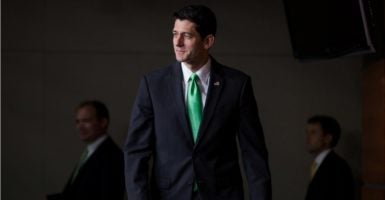 House Republicans huddling in the basement of the Capitol Friday morning weren’t strategizing to defeat Democrats. They were trying to quell dissension inside their ranks over the length of a stopgap spending measure.

And they’re running out of time. Congress must decide how to fund the federal government before its spending authority expires on Oct. 1. That task has tied the GOP conference in knots since the beginning of the year.

Members of the House Freedom Caucus want to lock in current spending levels for six months with a long-term continuing resolution.

That strategy prevents passage of any spending deal during the lame-duck session, the period after the election but before the next Congress convenes. Conservatives fear the lame duck because it provides an opportunity for unaccountable lawmakers to legislate.

Others, including members of the House Appropriations Committee, want a three-month continuing resolution that would fund the government until December and then require lawmakers to revisit the issue before Christmas.

They argued that a shorter continuing resolution, sources told The Daily Signal, would give lawmakers more flexibility and an opportunity to pursue other nonspending policies.

Rep. Dave Brat, R-Va., told The Daily Signal that Freedom Caucus members found that argument shortsighted. “There’s going to be maximum pressure in December when Obama’s leaving office,” Brat said. “He will use every carrot and stick available.”

Though House Speaker Paul Ryan didn’t tip his hand in favor of either a three- or six-month continuing resolution, he tried to soothe Freedom Caucus fears about the lame duck.

Conservatives have been on guard since President Barack Obama warned Congress that he plans to push the Trans-Pacific Partnership during the lame duck. But Ryan told the conference, according to multiple sources, that “it’s too late” for the administration to force a vote on the controversial trade legislation.

During the meeting, Ryan also repeated his distaste for omnibus bills, a massive lump spending package that he described last year as a “crap sandwich.” The speaker floated instead the idea of “minibuses”—small bite-sized bundles of appropriations bills.

That incremental approach isn’t likely to sway many members of the Freedom Caucus though, Brat said, because it’s “built on the assumption that the Senate will vote yes for anything other than an omnibus.”

Minority Leader Harry Reid, D-Nev., has indicated he won’t settle for anything less than a year-end omnibus package. Earlier in the week, Majority Leader Mitch McConnell, R-Ky., set the stage for the conflict when he announced negotiations with the White House and Senate Democrats over a short-term continuing resolution.

Most of the members who spoke at the Friday meeting, according to multiple sources, supported a short-term continuing resolution. But it’s unclear if that rhetoric swayed many conservatives. When lawmakers left town for the weekend, House Republicans were without a unified strategy on the issue.