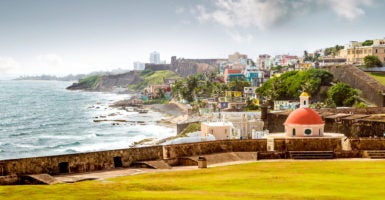 The Financial Oversight Management Board, a federally-mandated advisory group, has worked to help Puerto Rico deal with its financial crisis and establish policies that will lead to long-run growth. The board says Puerto Rico must reform its labor market to have a bright future.

While the oversight board has direct authority to enact certain fiscal reforms, it needs the Puerto Rican legislature’s approval to enact most of its proposed labor market reforms. Puerto Rico’s governor has agreed to most of the board’s proposed reforms, but the island’s legislature is trying to block the labor reforms that Puerto Rico’s people need.

Even with all of these changes, Puerto Rico would still have more onerous labor market regulations than the rest of the United States.

Oppressive labor regulations choke Puerto Rico’s economy. The island’s labor laws discourage companies from operating in Puerto Rico and have driven its labor force participation rate down to 40 percent—one of the worst in the world.

If Puerto Rico had the same labor force participation rate as the U.S. mainland—62 percent—it would have at least 50 percent more workers than it currently does.

More workers would create a win-win for the commonwealth. If sidelined workers reenter the workforce, they would begin contributing to Puerto Rico’s tax base and their transition from welfare to work would relieve Puerto Rico (and the United States) of significant welfare costs.

So why are so many Puerto Ricans not working?

Primarily because it’s expensive to employ workers in Puerto Rico.

For starters, Puerto Rico has the same minimum wage as the U.S. mainland. In the context of Puerto Rico’s economy, this is a much higher cost to meet—it is effectively 50 percent higher compared to the median wage. Moreover, regulations require employers to provide 27 days of paid leave, eight weeks of maternity leave, and mandatory Christmas bonuses.

Additionally, employers in Puerto Rico cannot fire employees at will. Instead, they have to overcome extensive legal hurdles or provide significant severance pay.

Finally, Puerto Rico is a forced-union territory, meaning workers must join unions and pay union dues. This drives employer costs up, creates inefficiencies in business operations, and prevents companies from setting up shop on the island.

In addition to what the board has proposed, Puerto Rico’s labor market and overall economy could benefit from a lower minimum wage. The island could also eliminate or waive the Jones Act, which drives up costs of mainland imports and exports.

Puerto Rico has workers, but it needs businesses to employ those workers. Unless it makes it easier to do business, Puerto Rico’s economy will continue to stagnate.

Puerto Ricans are flocking to the U.S. for better opportunities. This suggests that Puerto Ricans have much to gain and little to lose from reforming their labor laws.

Balancing Puerto Rico’s budget, cutting the fat out of its excessively large government, reforming its public utilities, and adding transparency and accountability to the government’s operations are all important components of Puerto Rico’s economic turnaround.

But without labor market reforms, there will be no new jobs. And without jobs, the commonwealth cannot grow.

If Puerto Rico’s lawmakers continue to reject the board’s labor market reforms, the island can expect more of the same—workers and businesses moving from Puerto Rico to the U.S. mainland, leaving the island in an even worse economic and financial situation.