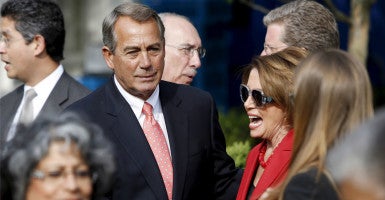 The House passed a two-year budget agreement, 266-167. The budget deal was the result of weeks of negotiations between House and Senate leaders. (Photo: Jonathan Ernst/Reuters/Newscom)

Despite overwhelming opposition from the majority of Republicans, the House of Representatives voted to pass a two-year budget deal today that raises spending caps by $80 billion and suspends the debt limit through March 2017.

The deal passed, 266-167, with support from moderate Republicans and all but one of the Democrats. Just 79 Republicans supported it, and all of those opposing the fiscal agreement were Republicans.

>>> See how your congressman voted below.

“Just in time for Halloween, this legislation is more trick than treat, with phantom savings and a truly terrifying $85 billion in new spending in the first three years,” Rep. Peter Roskam, R-Ill., said in a statement. “It was put together behind closed doors and once again puts today’s problems off until tomorrow.”

In a letter released Wednesday, Sens. Mike Lee, R-Utah, and Jeff Sessions, R-Ala., criticized the process behind the deal, writing that the deal was “crafted in secret without the involvement of the vast majority of our conference.”

The plan accomplishes Boehner’s goal of “cleaning the barn” for his successor, Rep. Paul Ryan, R-Wis., who earned the speaker nomination from the Republican conference just hours before the vote on the budget deal.

Ryan announced this morning he would support the plan, but yesterday criticized the back-room deal-making that ultimately led to the budget deal.

“What I’ve heard from members over the last two weeks is a desire to wipe the slate clean, put in place a process that builds trust and start focusing on big ideas,” Ryan said in a statement.

Both Boehner, the outgoing speaker, and Ryan, the incoming speaker, voted to pass the plan.

Boehner’s budget deal also calls for $150 billion to be reallocated from the Social Security Trust Fund to the Disability Insurance Trust Fund and a 15 percent increase to Medicare Part B premiums.

“I hope the history that is written about this legislation is that it was a bipartisan first step toward securing the kind of long term agreement all of us know we must achieve,” House Minority Whip Steny Hoyer, D-Md., said on the House floor today.

Though the budget deal passed with bipartisan support, conservative members strongly opposed both the substance of the plan and the nature in which it was crafted.

Specifically, conservatives pushed back on the suspension of the debt limit, which lawmakers feel gives the government unlimited borrowing authority. Additionally, conservatives in the House argued the fiscal plan was deliberately crafted in secret, shutting specific members out of the process.

The fiscal agreement faces an uncertain future in the Senate. Senate leaders plan to act on the agreement quickly, but a number of conservative senators have come out in opposition to the agreement. “Earlier this year, Republicans passed a budget that cut President Obama’s proposed spending by $7 trillion over the next decade and finally balanced, but this deal completely abandons that effort,” said Sen. David Perdue, R-Ga., in a statement.  “Our long-term plan was traded for short-term gimmicks, trust fund raids, and even more spending. This deal isn’t compromise; it’s surrender.”

When the bill goes before the upper chamber, Sen. Rand Paul, R-Ky., said he plans to filibuster it.

“I will filibuster the new debt ceiling bill,” Paul said Tuesday. “It is horrible. It’s hard for me not to use profanity describing it.”