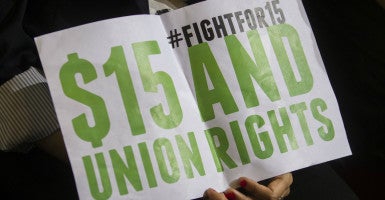 A supporter awaits the Los Angeles City Council's vote on an ordinance to raise the minimum wage in the city to $15 an hour by 2020 in Los Angeles Wednesday, June 3. (Photo: Ringo Chiu/ZUMA Press/Newscom)

The city of Sacramento recently approved a gradual increase in minimum wage to $12.50 by 2020, and with that a raise in the cost of operating small businesses.

While the California Legislature passed a proposed minimum wage of $10 to take effect Jan. 1, Sacramento’s increase to 12.50 over the next four years will put it on unequal footing with other municipalities.

Jim Relles, owner of Relles Florist in Sacramento, said the effect of the city’s wage raise might mean more challenges not just for small businesses but for business in general.

“I think it’s going to affect everybody in the community,” said Relles. “Right now the city of Sacramento is going to be a little island surrounded by other municipalities with a lower starting wage.”

Relles said that while the full implications of the wage hikes remain to be seen, more work for business owners and less work for lower level employees is a possible outcome.

“It phases in over the four years to $12.50,” said Relles. “I think larger companies can do more automation. Small business doesn’t have the capital to do things like that. I should say maybe us and most small businesses will be affected. I mean, I know a lot of small business people work 50 [hours a week]. I know of one fellow who works 80 hours [a week].”

In a statement provided to The Daily Signal, James Sherk, a research fellow at The Heritage Foundation’s Center for Data Analysis, said the outcomes suggested by Relles are more than possible. They are probable.

“Sacramento’s ordinance means city residents who produce less than $12.50 an hour for their employers can no longer legally work in the city. Businesses will not pay workers more than they produce. This will make it harder for less skilled workers to gain the experience necessary to command higher wages.”

Relles said his company’s overhead costs would most likely increase as a result of the minimum wage hike—a fate his company shares with other small businesses in the area.

“It’s not just the wage itself because it’s also our workers comp premium and our unemployment insurance is all based on wages. So, it’ll increase that part of our business.”

As for an alternative solution, Relles said he would rather see an equal minimum wage statewide and a slight change in rhetoric.

“But everybody’s area is different. It’s going to raise the cost of living for everybody. And I’d rather call it a starting wage than a minimum wage.”

Relles Florist was started 69 years ago in 1946 by Relles’ father. Relles says his father’s example of hard work as an entrepreneur is what has inspired him to keep working at the age of 68, despite the challenges of California’s Legislation and regulation.