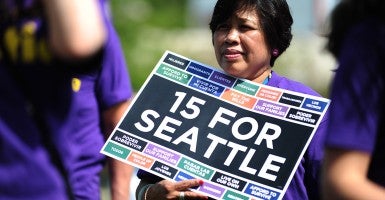 In the city of SeaTac, Wash., where the minimum wage is now $15 an hour, one business is charging customers a “living wage” surcharge.

Near SeaTac, Seattle also is hiking its minimum wage. On Monday, the city council voted unanimously to raise the minimum wage over several years until it reaches $15 an hour. In an Associated Press interview afterward, City Council member Kshama Sawant, a self-described socialist, noted that “$15 in Seattle is just the beginning.”

James Sherk, a senior policy analyst at The Heritage Foundation, remains unsurprised by the development of a living wage charge in SeaTac. Sherk said when labor costs increase, naturally or by design, companies have only two options—decrease  payroll or raise prices. In the case of Seattle, he said, “I expect to see both.”

Many Washington state business owners already have taken Sherk’s analysis a step farther. David Jones, the owner of Blazing Onion Burger, recently put the brakes on plans to open a new Seattle restaurant. “I would love to come to Seattle,” Jones said in a CNN-Money report. “But I have to do it responsibly.”