Should Teachers Be Allowed to Ditch Their Classrooms to Work For the Union? Two Lawmakers Want to Stop Practice. 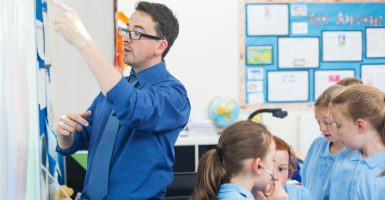 As part of the contract between the School District of Philadelphia and the Philadelphia Federation of Teachers, up to 63 teachers can walk away from their jobs to work full-time for the union while they continue to earn a public salary. (Photo: istockphotos)

PHILADELPHIA—City schools are struggling to find teachers, but the district and local teachers union have an agreement that permits dozens of them to abandon their classrooms to go work for the union every year.

As part of the contract between the School District of Philadelphia and the Philadelphia Federation of Teachers, up to 63 teachers can walk away from their jobs to work full-time for the union while they continue to earn a public salary; get a posh benefits package including free health care and pension benefits; and accrue seniority.

“This measure will close a loophole that allows public school teachers to take leave from the classroom and work full-time for their union while they continue to earn salary, benefits, accrue seniority and time toward their pension,” Phillips-Hill said.

Phillips-Hill’s office later said Watchdog’s exclusive reporting on the issue “was the starting point” for pursuing the legislation.

Also known as “release time” or “union leave,” the practice is standard among public unions around the country. Earlier this year, though, the Arizona Court of Appeals unanimously ruled that the Phoenix Law Enforcement Association wrongfully used taxpayer money to pay union cops who stopped policing so they could work for the union.

“Those actors that are allowing this behavior to take place have tried to cover it up for years,” he said. “When we think about this concept of ghost teaching, somebody getting paid, somebody who is labeled as a teacher, yet they haven’t actually taught a class in years, they’re actually gaining seniority over their colleagues, yet they’re not in the classroom. It’s unconscionable to think that our system in 2015 would allow this to take place.”

The PFT did not respond to a request for comment, but the union does reimburse the district for the wages ghost teachers earn.

Since 2003, Philly ghost teachers have earned $36 million. While that money can be paid back, ghost teachers also earn seniority for performing a job some of them haven’t done in decades, giving them an edge over less senior teachers who may lose their jobs under Pennsylvania’s “last in, first out” layoff policies.

In February, the Fairness Center, on behalf of Americans for Fair Treatment, a nonprofit membership organization, filed a lawsuit in Philadelphia seeking to end the practice of union work on school time, which it argues illegally devotes public resources to a private organization.

Last year, 18 Philadelphia ghost teachers earned $1.7 million working mostly as information officers for the PFT. Some ghost teachers, such as PFT President Jerry Jordan and Vice President Arlene Kempin, have been on leave from the classroom for more than 30 years.

The PFT recently held a rally urging the district to tear up its contract with Source4Teachers, the company responsible for finding substitute teachers, because of its woeful fill rate. The union also blasted the district for not filling a number of full-time teaching vacancies, yet the PFT is directly responsible for taking teachers out of schools under the ghost teachers agreement.

Many Pennsylvania school districts condone the practice, too, though they allow far fewer ghost teachers than Philly does. Pittsburgh permits up to 16 district employees to work full-time for the union.

Matthew Brouillette, president and CEO of the Commonwealth Foundation and a former history teacher, called the practice “legalized theft.”

“I don’t know of any dedicated teachers who would ever think of taking their teaching job as a cover for union work,” he said. “Teachers are hired to teach students, not play union politics.”

While the ghost teachers bill is introduced, Pennsylvania heads toward a fourth month of a budget impasse that’s cut state funding to public schools.

Gov. Tom Wolf has proposed record increases in education spending, but Christiana said before any new money is funneled to Philadelphia, which receives almost half of its budget from the state, lawmakers must take a closer look at how that money is being spent.

“We’re not going to balance the budget with this legislation, but what we will say to the taxpayers is that we’re going to institute some fairness,” Christiana said. “If the state is going to throw hundreds of millions more dollars into education, we’re going to at least fix some of the injustice that the system has in place.”

House Bill 1649 has been referred to the House Education Committee.

Evan Grossman is a Philadelphia-based education reporter for Watchdog.org, a national network of investigative reporters covering waste, fraud and abuse in government. Watchdog.org is a project of the nonprofit Franklin Center for Government & Public Integrity.