Liberal Comedian: I Want to ‘Make the Battle Against Planned Parenthood Funny’ 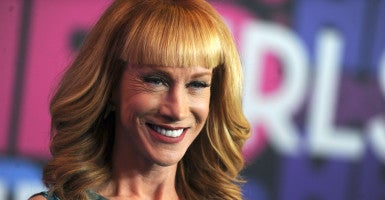 Comedian Kathy Griffin's "Like a Boss Tour" will include an act on the battle to defund Planned Parenthood. (Photo: Dennis Van Tine/ZUMA Press/Newscom)

“I’m going to figure out a way to make the battle against Planned Parenthood funny,” Griffin stated to BroadwayWorld.com. “I don’t know how, but I learned that the way to communicate with people is always humor first.”

At Carnegie Hall in New York City Nov. 12, during her 80-city “Like a Boss Tour,” Grammy and Emmy-winning Griffin will include a “soapbox” act on the battle to strip Planned Parenthood of government funds.

In an interview with Playbill.com’s Carey Purcell, Griffin said:

Growing up Planned Parenthood wasn’t even controversial! When I was a little girl, I remember reading a People magazine story about a girl who died getting a back alley abortion. At the time the feeling in the country was, ‘Oh my God, this has to stop.’ I cannot believe that in my lifetime the pendulum has swung back. So people don’t even know what Planned Parenthood is.

There are other options for women to receive health care. In the United States, 13,540 clinics (compared to 665 Planned Parenthood clinics) provide comprehensive women’s health care.

“It’s so insane to me that people think Planned Parenthood is something it’s not,” Griffin told Playbill. “It’s not like these are clinics that are everywhere saying, ‘Free Beer and Abortion.’ It’s Planned Parenthood. It’s been around forever.”

This is not the first controversial topic Griffin has weighed in on. In 2010, Griffin was booed by the Marine Corps Air Station in Miramar, Calif., after a joke about the supposed weight gain of Bristol Palin, daughter of former vice presidential nominee Sarah Palin.