If Planned Parenthood Loses Government Funding, Here’s a Map of Health Clinics That Could Take Its Place 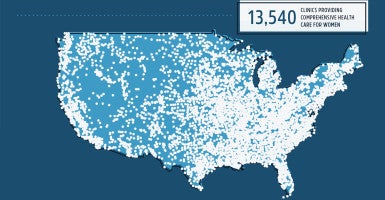 Pro-life organizations teamed up to showcase the thousands of community health care clinics that could step in for Planned Parenthood if it were to lose federal funding. (Photo: Alliance Defends/Charlotte Lozier Institute)

Two leading pro-life organizations released a map today intended to showcase the thousands of community health care clinics that could step in for Planned Parenthood if it were to lose federal funding.

The map adds to a heated conversation about whether stripping Planned Parenthood of its $500 million annual taxpayer dollars would hurt women’s health care in America, or if women would be better off without it.

The two groups argue there are plenty of health centers — that also can receive federal funding — to absorb Planned Parenthood’s patients should the organization be defunded by Congress.

“What these graphics put into pictures is what the data has been telling us for a long time,” Casey Mattox, a senior counsel at Alliance Defending Freedom who focuses on pro-life issues, told The Daily Signal. “Planned Parenthood is really a small part of the national health care picture in America.”

“Planned Parenthood is really a small part of the national health care picture in America,” @CaseyMattoxADF.

According to data collected by the two groups, there are currently 13,540 clinics providing comprehensive health care for women, versus 665 Planned Parenthood locations.

If Planned Parenthood’s federal funding “went away tomorrow,” Mattox argues, the money “would be better used by community health centers and other places around the country that can provide a fuller range of services to women without the ethical challenges that Planned Parenthood presents.”

The effort to defund Planned Parenthood comes after the Center for Medical Progress, a group that opposes abortion, released a series of damaging videos.

The videos show high-ranking Planned Parenthood employees discussing the sale of tissue from aborted babies and changing abortion procedures to harvest these organs.

The issues raise a host of legal questions and have sparked both state and federal investigations.

“The notion that you could literally overnight defund providers serving a couple million people and think that health centers—even if they’re right nearby, which is not always the case—could just magically absorb patients, I think shows an astounding naiveté in healthcare,” says Sara Rosenbaum, a professor of health law and policy at George Washington University.

“You can map all you want and the fact of the matter is health centers are not magicians and health care doesn’t work this way.”

“[T]he fact of the matter is health centers are not magicians and health care doesn’t work this way,” said Sara Rosenbaum.

Rosenbaum, in an interview with The Daily Signal, argued that banning Planned Parenthood funding would create an immediate health care access crisis for millions of women.

Texas, she says, is the “smoking gun” in the debate.

In 2012, Texas stopped funding abortion-providers like Planned Parenthood. Instead, in 2013 it created the Women’s Health Program, which provides low-income women with family planning services, health screenings and birth control.

According to a study by George Washington University, this resulted in community clinics increasing their women’s health care services by an average of 81 percent.

“Yes, health centers eventually ramped up. Yes, they offer more family planning services than they did before because they had to respond to a crisis and health centers are remarkable at responding to crises. But the state’s own data show that the actual number of patients served dropped.” She added:

We’re talking family planning, cancer screenings, things like that. You certainly do not want people who are seeking family planning to have to put it off at all. Otherwise, you wind up with unplanned pregnancies, half of which will turn into an abortion. This is exactly what we don’t want so why would you shut down a point of access for contraceptives? And why would you shut down cancer screen sites? It makes no sense.

Mattox, with Alliance Defending Freedom, argues the Texas example paints an entirely different picture—one that actually appears to be a success story.

“The data belies the claim that Planned Parenthood was necessary to women’s health care in Texas,” Mattox said.

In 2013, right after Texas ousted the organization, Planned Parenthood clinics in the state agreed to pay $4.3 million to settle a federal civil suit brought by the Justice Department under President Obama.

The suit claimed the organization fraudulently billed Medicaid for women’s health care services such as birth control from 2003 to 2009.

The massive drop in Medicaid and contraceptive claims, Mattox said, “may be evidence that Texas cleaned up a lot of false claims.”

In addition, Mattox argued the drop in program enrollees could be attributed to a bump in the economy—with more people enrolling on employer-provided health care plans—and the creation of the Affordable Care Act, which “compelled free coverage of contraceptives.”

“It seems some of our friends on the left conveniently forget that they created Obamacare and compelled free coverage of contraceptives when that is inconvenient to defending the need for Planned Parenthood,” he said.

Taking in these broader factors, Mattox argued the Texas example “might actually be good news” and further proof that taking away Planned Parenthood won’t hurt women.

It seems like there may be other factors that explain what happened to women during this time period in Texas. That might actually be good news—we may have solved problems rather than found new ones.

If Congress defunds Planned Parenthood, the country will have to wait and see if the Texas model will be tested on the national level.