Unions Made Big Donations to Planned Parenthood in 2014 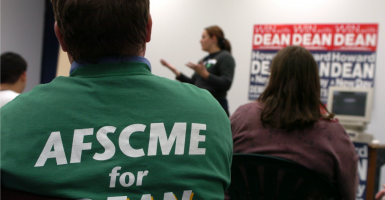 Unions are donating money to Planned Parenthood, and members who object are often unable to hold their unions accountable.

According to a search of union records on the Department of Labor’s website, the American Federation of State, County and Municipal Employees, the Service Employees International Union and United Food and Commercial Workers gave a combined $435,000 to Planned Parenthood last year.

James Sherk, the senior policy analyst in labor economics at The Heritage Foundation, said that “most union members have no idea that their union donates their dues to the largest abortion provider in America.”

“Federal law does not require unions to get their members’ authorization before spending their dues on controversial causes. Union leaders have wide discretion to spend their members’ money as they like,” Sherk said.

In many cases, workers have limited ability to hold their unions accountable for their donations. Those living in states without right-to-work laws have limited options. Most unions, Sherk said, “make it difficult for workers to opt out of their additional spending.” He explained:

Generally workers have a two week window each year in which they can exercise their limited opt-out rights. Many unions require objecting workers opt out every year. Workers who do so then lose the right to vote on ratifying union contracts and the right to vote in union officer elections. So pro-life employees can stop their union from giving their money to abortion providers, but unions generally make it difficult to exercise this right.