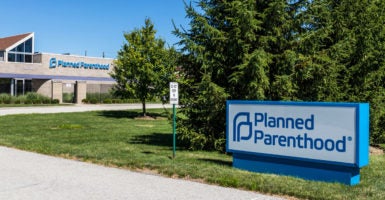 A recent government report has revealed that Planned Parenthood, the nation’s largest abortion provider, received over $1.5 billion in taxpayer funds from 2013 to 2015.

In 2016, over 120 House and Senate members sent a letter to the Government Accountability Office requesting information on federal funding for certain organizations involved in health-related activities.

The report was made public last week, and the findings are astounding.

Over a three-year period, Planned Parenthood and its affiliates spent $288 million in federal funds. They also received $1.2 billion in funding from Medicaid, which combines federal and state funds.

That adds up to a whopping total of $1.5 billion in taxpayer funds from federal health programs.

Yet, despite receiving billions in taxpayer funds over the course of three years, Planned Parenthood’s scope and services have both declined.

The organization’s 2015-2016 report revealed that Planned Parenthood served 100,000 fewer women in 2015-2016 compared to 2014-2015. Its number of health centers and affiliates declined, and it performed fewer cancer screenings and prevention services.

But the abortion giant did perform several thousand more abortions than the year prior: 328,348 compared to the previous year’s 323,999. Moreover, Planned Parenthood performed 83 abortions for every one adoption referral.

Planned Parenthood claims to provide a full range of women’s health services and to present women with a variety of choices, but the figures make clear its real priorities. Abortion remains Planned Parenthood’s bottom line.

Fortunately, in 2017, President Donald Trump reinstated the Mexico City policy, aka the Protecting Life in Global Health Assistance policy, so that now these organizations can only receive these global health assistance funds on the condition that they do not perform or promote abortion overseas.

That’s good news, but there is still much more to be done to prevent public funds from being tied up with abortion on demand.

Congress should make it a priority to defund Planned Parenthood and instead direct those funds toward the thousands of centers that provide health care for women without entangling government with the abortion industry.

Congress should then turn its attention to the No Taxpayer Funding for Abortion Act, which would permanently end taxpayer funding for abortion. That bill passed the House of Representatives in January 2017, but the Senate has failed to take it up.

These shocking new numbers underscore the urgent need for policymakers to move on this issue. We must end taxpayer funding for abortion once and for all.