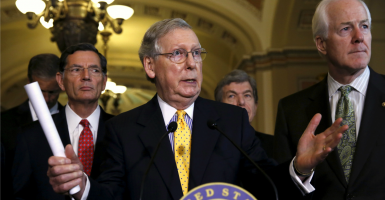 Senate majority leader Mitch McConnell, R-Ky., is allowing a bill reauthorizing the Export-Import Bank to be attached to a "must pass" bill, while pushing a defund Planned Parenthood bill as a stand-alone bill. (Photo: Jonathan Ernst/Reuters/Newscom)

It’s hard to believe what happened in Washington this weekend.

The U.S. Senate attached an amendment resurrecting a dead corporate welfare program to the highway bill while refusing to even allow a vote to end taxpayer funding for Planned Parenthood.

Conservatives have been fighting to stop the Export-Import Bank, which is a taxpayer-financed bank that loans billions of dollars to foreign companies and countries to buy products from big corporations like GE, Caterpillar and Boeing. Last month, they were successful in preventing it from being reauthorized, sending the company into liquidation. The CEO of Boeing even stated that the Export-Import Bank wasn’t needed.

Nevertheless, legislators sought to reauthorize Ex-Im through unrelated amendments to a highway funding bill. Highway funding is running out, and replenishing the highway trust fund is seen as a “must pass bill.”

Congress routinely attaches unrelated measures that may not be able to pass on their own to “must pass bills” in order to pressure acceptance of it by Congress and the president. This is why year-end funding bills that prevent a government shutdown are often packed with unrelated measures.

While all this was going on, Americans from all over the country have been outraged by recent videos of Planned Parenthood in which employees discuss selling organs from aborted babies. (Planned Parenthood has denied that the organization profits.) Planned Parenthood received over $500 million in taxpayer funding while performing 327,653 abortions during its last reporting year alone.

Instead of having a vote on Sen. Mike Lee’s amendment to end taxpayer funding of Planned Parenthood, Republican leaders are promising a stand-alone bill on the issue to have a vote later this year.

But I’ve seen this charade many times before. Everyone knows that stand-alone bills on controversial matters have a very hard time clearing Senate filibusters, the House of Representatives and President Obama’s veto. Obama won’t want to veto the highway trust fund bill—he believes that highway funding is essential—but he’ll probably be completely comfortable vetoing a Planned Parenthood defunding bill.

So why did Washington politicians give special priority to corporate welfare over ending taxpayer funding of the nation’s largest abortion provider?

Why not demand that the Export-Import Bank pass as a stand-alone bill? Why must only conservative legislation be given the higher hurdle to overcome?

Why are lobbyist priorities given the easier path than conservative priorities?

If the Planned Parenthood defunding were attached to the highway bill, Obama would have a real dilemma. Instead, GOP leadership seems hell-bent on saving Obama from that dilemma by reauthorizing crony banks and giving Planned Parenthood a pass.