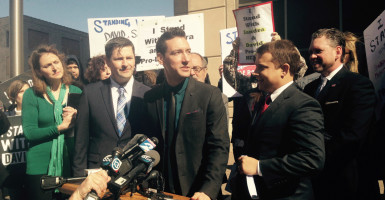 “We’re out here to send a strong message that Houston's children and their body parts are not for sale by Planned Parenthood,” David Daleiden, founder of the Center for Medical Progress, said at a press conference in Houston. (Photo: Reuters/Newscom)

The pro-life activist behind a series of undercover videos exposing the practices of Planned Parenthood emerged Thursday from court appearances in Texas vowing to continue his fight for unborn children despite being charged with breaking the law through his tactics.

“We’re out here to send a strong message that Houston’s children and their body parts are not for sale by Planned Parenthood,” David Daleiden, founder of the Center for Medical Progress, which released the videos, said at a press conference in Houston.

He added: “I’m very grateful for all the support from the public.”

Daleiden’s group released its latest hidden-camera video, shot in April at a Planned Parenthood facility in Houston, two days before his appearance in the same city to respond to his indictment by a grand jury.

Daleiden was indicted Jan. 25 on a felony charge of “tampering with governmental records”—which included falsifying a California driver’s license—and a misdemeanor charge of “intentionally and knowingly” offering to buy human organs.

He turned himself in to Houston law enforcement Thursday morning for processing and went on to post bail.

His associate, Sandra Merritt, also was indicted on a charge of falsifying a driver’s license. She posted bail Wednesday. Both live in California.

“The tactics [Daleiden] used are no different than Mike Wallace and other investigative journalists have been using … for many years,” Daleiden’s lawyer Jared Woodfill told reporters.

“Using the logic applied by Harris County’s D.A. office, every reporter on ‘20/20’ is guilty,” he added.

“David is a modern-day hero,” Woodfill said. “He has exposed the wrongdoing that’s been occurring at abortion clinics all across this country. And the fact that he is here today is a miscarriage of justice[.] … We are hopeful that this DA will go after the real wrongdoer, Planned Parenthood.”

Terry Yates, another lawyer for Daleiden, told reporters Daleiden would not accept a plea deal to stay out of prison.

Daleiden and Merritt, who are expected to plead not guilty, face 20 years in prison on the felony “tampering” charge. Daleiden faces up to a year for offering to buy human organs.

The video posted Tuesday by the Center for Medical Progress features “overlooked footage” from an April 9 undercover site visit by Daleiden and Merritt to meet with Melissa Farrell, research director for Planned Parenthood Gulf Coast.

During the hidden-camera conversations, Farrell describes the Planned Parenthood invoice system for procuring body parts and other fetal tissue from aborted babies.

“We had two levels of invoicing for them,” Farrell says on the video. “We had it worded as ‘per consent’ because the consent process was the administrative part that we had to do, then we had an overall ‘administrative fee’ for basically working it into the [Planned Parenthood] clinics themselves.”

“Based on what I’m reading here,” Farrell tells the undercover Daleiden and Merritt in the video, “I think it’s paying for the specimen itself.”

The Center for Medical Progress contends that such a transaction is illegal under state law—Texas Penal Code 48.02—which prohibits the exchange of human organs for “valuable consideration.”

“Whether the ‘consent fee’ for fetal tissue is $25 or $150, it is completely outside the letter and spirit of Texas Penal Code 48.02,” Daleiden’s group said in a statement.

Planned Parenthood officials, however, have argued that previous videos from the Center for Medical Progress are “malicious lies.”

“These people broke the law to spread malicious lies about Planned Parenthood in order to advance their extreme anti-abortion political agenda,” Eric Ferrero, vice president of communications for Planned Parenthood Federation of America, said last month in a response to Daleiden’s indictment.

“As the dust settles and the truth comes out, it’s become totally clear that the only people who engaged in wrongdoing are the criminals behind this fraud, and we’re glad they’re being held accountable,”  Ferrero said.

This report has been modified to add details and to correct quotations attributed to Melissa Farrell and Jared Woodfill.