Obama, Xi to Cautiously Wade Through Talks of Improved Relations 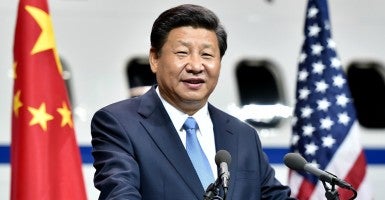 The two-day summit meeting will allow Obama and Xi to underscore their willingness to improve U.S.-China relations, which have become increasingly shaky following a string of Chinese cyberattacks, strained economic ties and Beijing’s strong-arm attempts to claim territory in the South China Sea.

The meetings will prove a balancing act for an administration looking to rebuke Chinese aggression and escalated human rights abuses while leveling a relationship that could turn tides in future cooperation.

Sen. Cory Gardner, R-Colo., said the trajectory of China’s foreign and domestic policy decisions are “fundamentally at odds” with a nation aspiring to become a leading power and “threaten to undermine” the U.S.-China relationship along with security across the Asia-Pacific region.

“Beijing’s foreign policy has taken an aggressive and disturbing turn,” he said during an event at The Heritage Foundation Thursday.

Gardner, chairman of the Senate Foreign Relations Subcommittee on East Asia, the Pacific, and International Cybersecurity Policy, said the president must “demonstrate leadership and deliver a strong message” that the U.S. will not be “deterred by lawless behavior.”

He noted China’s recent uptick in human rights abuses, including the repression and coercion of groups engaged in political advocacy, the illegal detention of more than 200 human rights lawyers, and the continued harassment of religious and ethnic minorities.

“We simply cannot accept this type of behavior from a nation that wants to be thought as a genuine, global partner of the United States,” he said.

Among prioritized discussions of climate control and military cooperation, the leaders are expected to announce the world’s first cyber arms control agreement that would prevent either nation from attacking the other’s critical infrastructure during peacetime.

Though the accord would address attacks on power grids and cellphone networks, it would not address the high-level forms of hacking China allegedly used against the U.S. to steal intellectual property and personal data from millions of government employees, according to The New York Times.

Gardner cited a report from the Commission on the Theft of American Intellectual Property that found China accounts for about 50-to-80 percent of international intellectual property theft cases, which costs the U.S. economy over $300 billion annually.

Wednesday, a day before Xi’s expected arrival, the Office of Personnel Management announced the hackers who breached its security database and stole 22 million personnel records also seized the fingerprints of 5.6 million government employees.

While U.S. officials have privately named China as the perpetrator, Obama has remained publicly silent. President Xi denied involvement in the hacks earlier this week while speaking to business and technology executives in Seattle, the Chinese president’s first stop in the U.S.

“The Chinese government does not engage in theft of commercial secrets in any form, nor does it encourage or support Chinese companies to engage in such practices in any way,” he told The Wall Street Journal.

Gardner dismissed the shifted blame and called on the president to personally reprimand President Xi for the cyberattacks during his visit, which he called a “serious threat” to U.S. national and economic security.

Despite his skepticism, Gardner called the U.S.-China relationship the most “consequential” bilateral relationship of the 21st century.

“Decisions made by Washington and Beijing will reverberate far beyond our two capitals, they’ll reverberate around the world, and that’s why we must get this relationship right.”