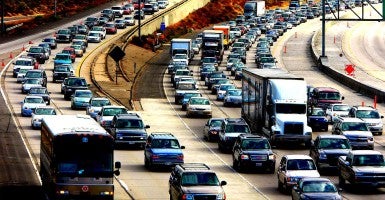 It is better to ensure that serious reform can at least be debated in the coming months than to allow the matter to be balled into a huge spending bill. (Photo: Gene Blevins/ZUMAPRESS/Newscom)

After bailing the Highway Trust Fund out (yet again) with $8 billion dollars at the end of July, Congress faces yet another deadline to authorize spending on highway and transit programs this fall.

Per the July agreement, spending authority for these programs is set to expire on October 29th, adding yet another important deadline to a critical fall for fiscal issues in which lawmakers must come to an agreement on government funding, the debt ceiling, and other deadlines.

Because the July bailout did absolutely nothing to fix the badly broken transportation spending mechanism overseen by Congress, the trust fund still requires extensive reform.

Address Transportation Individually and Say No to Big-Spending Bailouts

In order to accomplish this, Congress should ensure that highway funding does not get absorbed into a larger spending measure (such as a continuing resolution or debt ceiling deal) where it will be substantially ignored, or settle on an exceptionally irresponsible long-term bill—such as the Senate-passed DRIVE Act—just to pass something.

Instead, lawmakers should consider the Department of Transportation updated estimates of the highway trust fund’s cash flows.

The Department of Transportation—with some reluctance, it must be said—projects the latest cash infusion will buoy the Trust Fund until summer 2016 as payments slow in the winter months. This is substantially longer than the original expectation that the $8 billion would last only through December.

Specifically, the Highway Account is projected to dip slightly below its “prudent operating balance” of $4 billion in November, but then rebound until May – where it will maintain a positive yet declining balance until June or July when it would require another bailout (mass Transit receives money from its own account in the trust fund).

Notably, payments will keep rolling out of federal coffers below the $4 billion “prudent balance”, which is the amount the Department of Transportation needs to maintain for regular reimbursements to the states.

Dipping below that level may simply require the Department of Transportation to implement cash flow management procedures as necessary, such as delaying payments.

Because the $8 billion bailout will last a lot longer than initially expected, all lawmakers need to do is to reauthorize spending through the spring when transportation can be addressed outside of the current crisis-like setting.

This would not require any new funding offsets and would allow Congress more time to debate a proper transportation bill, a far superior option to hiding transportation funding in a trillion-dollar spending package or rushing into passing an irresponsible bailout that will only further damage the trust fund’s finances.

While some who are calling for a long-term bill like the $350 billion DRIVE Act may decry another short-term authorization as “kicking can down the road”, enacting the DRIVE Act would be like kicking the can farther down the road after stomping on it and lighting it on fire.

The bill would spend billions more out of the Highway Trust Fund even though spending already outpaces revenues by about $15 billion every year. This would leave the trust fund is substantially worse shape after it burns through its $47 billion in bailout cash in three years.

Given the daunting list of deadlines Congress faces over the next couple months, transportation reform—while urgently needed—is not going to be at the top of the agenda.

It is better to ensure that serious reform can at least be debated in the coming months than to allow the matter to be balled into a huge spending bill or—even worse—exacerbate the fund’s problems with a bigger bailout like the truly misguided DRIVE Act.