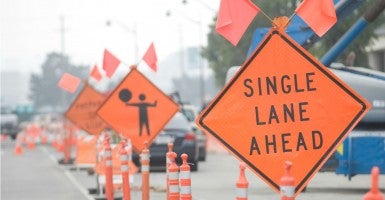 This year, the trust fund will spend $13 billion more than it receives in revenues. (Photo: istockphoto)

Today the House will take up a short-term “patch” measure to shore up the Highway Trust Fund, which is set to dip below critical levels at the end of the month. The patch would keep the fund afloat through December by transferring $8.1 billion from the Treasury into the Highway Trust Fund.

The measure is intended to buy members more time to devise a longer-term proposal that would likely use revenues from a tax on corporations’ overseas profits—known as repatriation—to cover the $90 billion needed for a six-year bill.

The measure is the latest installment—the 34th since 2008, in fact—in a series of short-term measures used to address the Highway Trust Fund’s chronic overspending. The trust fund, fueled primarily by taxes on gas and diesel, shells out about $50 billion annually for federal highway and transit projects. This year, the trust fund will spend $13 billion more than it receives in revenues. That deficit is expected to grow to $22 billion in 10 years, resulting in a $168 billion cumulative shortfall by 2025.

The House’s current plan—using an $8 billion patch to open up the door for a repatriation proposal—is fiscally irresponsible and bad transportation policy. It would keep in place a broken system while violating the “user pays” principle, which calls for the users of transportation to pay for the costs—the foundation of highway funding since 1956—by using unrelated revenues to fund transportation projects.

And these funding measures would ostensibly do nothing to reform the misguided spending policies that annually eclipse revenues and divert gas tax dollars to projects wholly unrelated to highways.

Essentially, the House is proposing one big tax-and-spend plan.

The proposal relies on a series of gimmicky offsets to pay for the $8.1 billion in new spending. It makes no meaningful spending reforms or cuts, relying wholesale on new revenues raised through tax increases or fee shifts.

Worst of all, the proposal uses a gimmick that would siphon over $3 billion in future Transportation Security Administration fees imposed on airline passengers to fund new spending on surface transportation.

These measures are unacceptable: Congress should not impose new, unrelated taxes to fund additional spending on transportation programs.

Because the bill relies solely on revenues with no cuts, the bill violates a procedural rule that is intended to stop tax and spend measures such as this. Known as CUTGO, the House rule requires any bill to offset new mandatory spending with cuts—not new revenues.

Unsurprisingly, the House decided to suspend the rule for this bill, turning their back on the fiscally responsible principles they imposed on themselves. What’s the point of a rule designed to force tough spending decisions if it is ignored as soon as a truly difficult choice arises?

Troublingly, the $8 billion patch could make way for a larger repatriation deal, which would simply constitute a bailout of greater magnitude. Repatriation should only be used in the context of comprehensive business tax reform, not used as a vehicle to pump more unrelated tax revenues into the broken Highway Trust Fund.

Instead of going along with this tax and spend agenda, members should insist on comprehensive reform that moves control of transportation dollars away from the squabbling Congress and towards the states and localities that are best suited to spend it responsibly.

Our transportation system needs a break from the status quo so that funds are spent efficiently and sensibly. The proposal before the house goes in precisely the wrong direction.