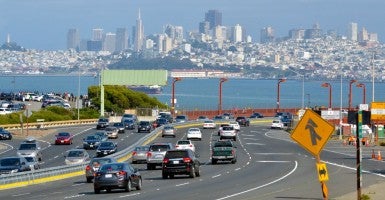 Not to be outdone, the Senate released its 1,030-page, six-year highway deal, including $48 billion in offsets that make even more extensive use of tax increases and budget tricks.

The kicker is that these measures will pay for only the first three years of the bill, leaving the final three years of spending to be funded down the road or appended to deficits.

To address the funding problem in the final years, the bill simply requires the secretary of transportation to notify members of Congress and state departments of transportation when trust fund balances are running low. It’s up to them to figure out later.

Among others, the bill would include $12.5 billion for a new national freight program and would increase federal meddling in local mass transit projects by about $8 billion compared to the current baseline (mostly paid for by motorists, of course).

Tacking on additional spending with no long-term plan for reform is fiscally reprehensible: the Highway Trust Fund is faced with a $168-billion shortfall over the next ten years. The Senate plan ignores this detail and continues the unabated flow of federal dollars, especially to programs other than highways.

The $48 billion in offsets used to pay for this new spending covers only half the bill’s intended length. Worse, the measures used to bring in this new revenue (or create the illusion of spending cuts) have nothing to do with fixing the Highway Trust Fund.

Instead, they are largely revenue increases that enable the careless flow of tax dollars to continue as usual, albeit at a brisker pace.

Many of the offsets are simply tax compliance measures that raise more revenues in the allotted 10-year budget window. You’d think a Republican Congress would use these to offset tax cuts elsewhere, not increase federal outlays.

Inexcusably, the Senate proposes to raise dedicated fees paid by airline passengers to the Transportation Security Administration and U.S. Customs officials and shift them to pay for highway spending.

This defies basic logic and makes a mockery of the “user pays” principle that stipulates that those who use a specific service should be the ones paying for it.

Other measures include a unilateral cut in long-standing Federal Reserve payments to banks, allowing the Fed to remit an additional $16 billion back to the Treasury.

Another measure would bring in $9 billion in proceeds from selling off part of the government’s Strategic Petroleum Reserve.

But in a case of classic government accounting, the bill assumes that the barrels of crude will sell for $89 per barrel—nearly twice today’s going rate of $50 per barrel.

Fixing this Social Security error is great, but shouldn’t those funds be used to address the looming entitlement crisis rather than fund a new streetcar somewhere? And this won’t stop Congress from counting the nixed benefit cash toward both Social Security and highway spending, when in reality the savings can’t go to two places at once.

The bottom line is that this bill seems as though it was devised in a fantasy world. It says nothing about addressing the long-term problems in the Highway Trust Fund, and it exacerbates them by tacking on spending for unnecessary new programs. It pays for only half of the bill, and does so by relying on unacceptable gimmicks and tax increases.

This is a big-government, tax-and-spend bill in its worst incarnation.

Any Congress that considered itself even tangentially attached to reality would scrap this 1,000-page bill and go back to the drawing board.

This story has been updated. The amount for a new national freight program was originally listed as $13.5 billion.