Find Out If Your Senators Voted to Audit the Fed 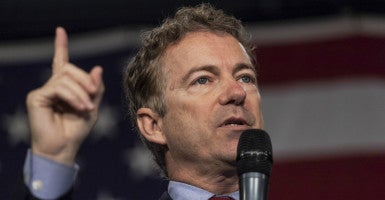 An effort spearheaded by Sen. Rand Paul, R-Ky., to audit the Federal Reserve failed in the Senate. (Photo: Brian Frank/Reuters/Newscom)

Legislation that would have given Congress the authority to audit the Federal Reserve was blocked Tuesday in the Senate. The bill fell seven votes shy of clearing the 60-vote threshold needed to advance out of the chamber. The vote was 53-44.

If passed, the legislation would have expanded oversight over the central bank and, for the first time, empowered the Government Accountability Office to audit the institution.

Sen. Rand Paul, R-Ky., had spearheaded the effort, fast-tracking the legislation in November to ensure a vote this year. Before the vote, Paul drummed up support for the measure, called the Federal Reserve Transparency Act, saying on the Senate floor:

Regardless of one’s monetary policy views—regardless of whether you think interest rates should be higher or lower—everyone can and should agree that for the sake of our country’s economic well-being, we need to know what has been going on behind the Federal Reserve’s cloak of secrecy.

Similar legislation sponsored by Rep. Bill Huizenga, R-Mich., had already passed the House. The White House has threatened a veto. The Federal Reserve has publicly pushed back against the measure.

See how your senators voted below: