5 Takeaways From the Planned Parenthood Videos 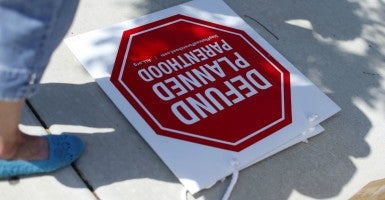 People need to watch these videos because they show exactly why $500 million in taxpayer money should be directed away from Planned Parenthood and toward health care providers that provide more comprehensive care and are not tainted by a national scandal.

In one video, Holly O’Donnell, a former blood and tissue procurement technician for StemExpress, said that some baby parts were obtained without the mother’s consent: “If there was a higher gestation, and the technicians needed it, there were times where they would just take what they want,” O’Donnell said. “And these mothers don’t know. And there’s no way they would know.”

As part of its damage control efforts, Planned Parenthood’s president claims they acquire tissues from aborted babies “with full, appropriate consent from patients, under the highest ethical and legal standards.” But according to the video, this is contradicted by O’Donnell’s firsthand account of her experience inside a Planned Parenthood affiliate clinic.

Let me just figure out what others are getting, if this is in the ballpark, it’s fine, if it’s still low then we can bump it up. I want a Lamborghini.

Another video shows Dr. Savita Ginde, vice president and medical director of Planned Parenthood of the Rocky Mountains in Denver, discussing a “per-item” organ pricing scheme “because we can see how much we can get out of it.”

In the first video released, Dr. Deborah Nucatola reportedly revealed that Planned Parenthood modifies its procedures in certain cases to preserve organs. Nucatola describes how abortionists (of which she is one) may use ultrasound to carefully choose which parts of a baby to “crush” and which to leave intact during an abortion in order to better harvest the babies’ hearts and livers, at $30 to $100 per organ.

In another video, Farrell discusses the possibility of altering abortion procedures in order to obtain more intact samples:

If we alter our process, and we are able to obtain intact fetal cadavers, we can make it part of the budget that any dissections are this, and splitting the specimens into different shipments is this. It’s all just a matter of line items.

The legality of altering these procedures is in question. As legal scholar Hans von Spakovsky points out, “there is evidence in the videos that Planned Parenthood doctors may be violating the ban against partial-birth abortions by using abortion procedures intended to get around the ban.”

The most recent video shows Cate Dyer, the CEO of StemExpress, commenting on the testing of baby parts coming out of certain abortion clinics:

We’ll do testing on our side, so we’ll be able to see, you know. And sometimes we’ll find that it can be clinic-specific. I’ve seen really rampant, rampant problems with bacteria in certain clinics. […] I’ve seen staph come out of clinics.

Although it is unclear if Dyer was referring to Planned Parenthood clinics specifically, there is a reasonable basis to infer that she was, given that Planned Parenthood is responsible for almost one out of every three abortions performed in America. In the past, Planned Parenthood has also been accused of jeopardizing the safety and health of women.

In the wake of the videos, many have tried to obscure Planned Parenthood’s sale of baby body parts by calling it “fetal tissue donation” or referring to the aborted babies as “products of conception.”

Yet in the videos, clinic workers themselves recognize the humanity of the babies being killed by Planned Parenthood. Planned Parenthood workers’ statements such as “It’s a baby” and “Another boy!” make it clear that they know they are dissecting not mere “tissue” from the mother’s body, but the bodies of human babies.

In the most recent video, Dyer comments on the need to dehumanize the samples before sending them to researchers:

It’s almost like they don’t want to know where it comes from. I can see that. Where they’re like, ‘We need limbs, but no hands and feet need to be attached.’ […] They want you to take it all off, like, ‘Make it so that we don’t know what it is.’ […] But we know what it is.

Dyer is right. We do know what it is. It’s a baby.

These videos have naturally prompted outrage among Americans across the country who don’t want their tax dollars going to an organization that engages in such reprehensible practices.