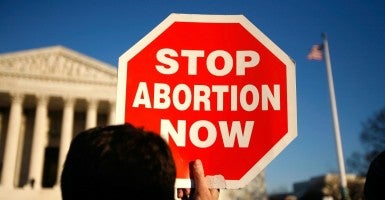 An analysis of the conversation surrounding abortion taking place on Twitter found that those located outside of Washington, D.C., are more engaged in the debate than those inside the Beltway. (Photo: iStockphotos)

A series of videos that show Planned Parenthood executives discussing the sale of aborted fetal organs has sparked a nationwide debate on Twitter about the organization’s practices.

A new analysis of trends on the social media site shows that those located within the Beltway took longer to join the conversation and are talking less about it than most of the country.

According to data provided by Echelon Insights, an opinion research firm, abortion has been one of the most talked about issues on Twitter among all users and those identified as part of the conservative base.

The firm analyzed how frequently abortion was discussed on Twitter over the last eight months and found that conversation surrounding the issue surged in conjunction with the release of videos from the Center for Medical Progress.

The Center for Medical Progress released its first video involving Planned Parenthood less than one month ago and yesterday published its fifth, with more expected. In the weeks that have followed, there have been increased calls for Congress to strip Planned Parenthood of its federal funding. Lawmakers plan to conduct hearings on the organization’s practices when they return from the month-long August recess.

According to Echelon Insights’ analysis, discussion surrounding abortion has been frequent among all Twitter users and conservatives. However, that isn’t the case among “Beltway Elites,” or Washington, D.C., insiders and liberals.

Volume of conversation surrounding abortion among Beltway Elites, liberals and conservatives on Twitter from July 2014 to August 2015. (Chart: Echelon Insights)

>>>Did Your Senator Vote to Defund Planned Parenthood? See Here.

After the first video was released July 14, there was a surge in the number of mentions of abortion on Twitter.

However, the surge was not just among “Beltway Elites.” Instead, including everyone on the social media site, abortion was mentioned more than 90,000 times on July 14.

However, the release of the first Planned Parenthood video didn’t resonate with Beltway Elites and liberals. Among those demographics, abortion was the fifth and ninth most discussed topic, respectively.

The firm calculates an “Insider Score,” which measures how much Beltway Elites are discussing a topic compared to all Twitter users. Scores below 0 indicate more of a conversation outside the nation’s capital.

Last month, the Insider Score of conversation surrounding abortion indicated that Twitter users outside Washington, D.C., were discussing the issue more than those in the Beltway.

The Center for Medical Progress released a second video involving another Planned Parenthood executive on July 21. The video showed a doctor allegedly negotiating the sale of aborted fetal tissue, and after the group published the video, Twitter saw its second highest peak in conversation surrounding abortion, with more than 50,000 mentions among all users.

However, that didn’t last long.

Among everyone on the social media site and conservatives, it was the most discussed issue on July 22. But for Beltway Elites and liberals, abortion ranked fourth and sixth among discussed topics, respectively.

One week later, on July 30, the Center for Medical Progress released another video showing Planned Parenthood allegedly discussing the sale of aborted fetal organs. This video stirred up conversations once again among all Twitter users—and conservatives, specifically.

According to Echelon Insights, the topic surpassed the level of discussion on July 22, and abortion had the second most mentions on Twitter, topping 77,000. Additionally, the issue became the most-discussed across all Twitter users and among conservatives.

Keeping up with previous trends, abortion was the second and fourth most discussed topic among liberals and Beltway Elites, respectively.