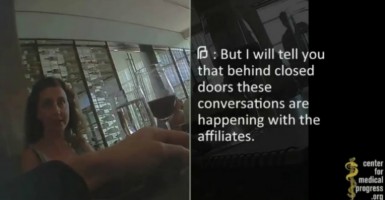 Photo: The Center for Medical Progress

A new undercover video shows a Planned Parenthood executive describing the sale of fetal body parts at the organization’s affiliates.

The Center for Medical Progress released the video on Tuesday, calling it the first in its “Human Capital” series, “a nearly 3-year-long investigative journalism study of Planned Parenthood’s illegal trafficking of aborted fetal parts.” In the full video of their meeting with Nucatola, the actors discuss the “research” their organization is conducting that requires human body parts.

The sale or purchase of human body parts is illegal in the United States, including human fetal tissue, which is a federal felony that is punishable by up to 10 years in prison.

Nucatola also suggested that some abortion providers are willing to tweak their surgical “technique” to ensure that the desired part remains intact during the procedure “if they’re reasonable people.”

“If you maintain enough of a dialogue with the person who’s actually doing the procedure, so they understand what the end-game is, there are little things, changes they can make to increase your success,” Nucatola said.

Nucatola was aware of the potential legal ramifications surrounding the practice.

“At the national office, we have a litigation and law department which just really doesn’t want us to be the middle people for this issue right now,” Nucatola said. “But I will tell you that behind closed doors these conversations are happening with the affiliates.”

In a separate video clip, the “buyer” thanks Planned Parenthood President and CEO Cecile Richards for introducing him to Nucatola, who he described as “very helpful” with “fetal tissue collection.”

A spokesperson for Planned Parenthood did not return The Daily Signal’s request for comment.

The Center for Medical Progress’ David Daleiden, who led the project, said in a statement:

Planned Parenthood’s criminal conspiracy to make money off of aborted baby parts reaches to the very highest levels of their organization. Elected officials must listen to the public outcry for Planned Parenthood to be held accountable to the law and for our tax dollars to stop underwriting this barbaric abortion business.

The full video of the actors’ meeting with Nucatola was also made available by the Center for Medical Progress: