Did Your Senator Vote to Defund Planned Parenthood? See Here 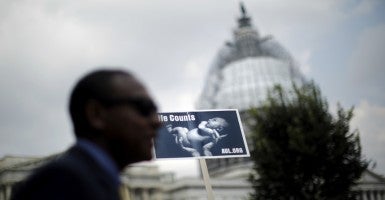 Conservatives used today's vote as a test, hoping to link a measure to defund Planned Parenthood with a must-pass spending bill this fall. (Photo: CARLOS BARRIA/REUTERS/Newscom)

A Senate bill to strip Planned Parenthood of its $500 million in federal funding fell short of the 60 votes needed to advance, gaining the support of 53 senators.

Senate Majority Leader Mitch McConnell, R-Ky., voted no, which allows him to bring it back for a vote at a later time. Sen. Lindsey Graham R-S.C., was absent for the procedural vote held Monday night.

Click here or look below to see the 53 senators who voted in favor of defunding Planned Parenthood, and the 46 who voted against it.

The legislation, led by Sens. Joni Ernst, R-Iowa; James Lankford, R-Okla.; and Sen. Rand Paul, R-Ky., among others, came as a result of a string of undercover videos that surfaced showing Planned Parenthood senior employees discussing the harvesting of fetal body parts from aborted babies.

The measure would have stripped federal funding from Planned Parenthood and redistributed it to other qualified health centers.

Planned Parenthood adamantly denies any wrongdoing in the videos, which have triggered multiple investigations and calls to strip the organization of its taxpayer dollars.

Monday’s vote was largely symbolic, with some Republicans wanting to test the waters to see if they have enough support to link the measure to defund Planned Parenthood with a spending bill this September that’s required to keep the government running.

Doing so would require 41 votes. In order to continue funding Planned Parenthood, supportive lawmakers—the majority of them Democrats—would need the backing of 60 senators.

Given today’s 53-46 outcome, they now face an uphill battle.

If both sides fail to reach an agreement by Oct. 1, the government faces another shutdown.

Paul, who is running for president in 2016, said a government shutdown would be on Democrats and President Obama.

In the House, Republicans are divided on how to best address the recent Planned Parenthood scandal, with Speaker John Boehner, R-Ohio, suggesting that Congress get “facts first” before defunding the organization and conservatives arguing that there’s no time to wait.

Pro-life members like Rep. Diane Black, R-Tenn., pressured House leadership to take up legislation this week that would place an immediate one-year moratorium on federal funding of Planned Parenthood until Congress completes its investigations. But members departed last week for their month-long summer break without taking any action.