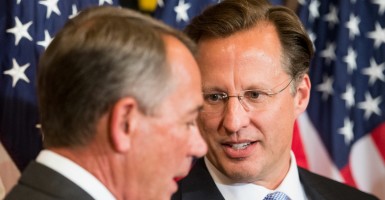 GLEN ALLEN, VA.—For one conservative lawmaker, Congress’s upcoming debate on funding the government and stripping Planned Parenthood of federal dollars could play a significant role in whether a challenge to House Speaker John Boehner is mounted.

In an interview with The Daily Signal, Rep. Dave Brat, R-Va., warned that Boehner’s, R-Ohio, future as the party leader could be jeopardized depending on how he handles both a continuing resolution funding the government and whether Planned Parenthood is permanently stripped of its federal funding.

“I voted against the speaker last time, and so I think on this motion, it’ll come down to leadership’s actions with respect to the budget,” Brat said, referencing a motion to vacate the chair.

“On that triple threat, if they bail out and just do a [continuing resolution] and don’t handle any of the substantive issues, and they don’t deal with Planned Parenthood in any way, shape, or form, and the unconstitutional amnesty is still not dealt with, then I think my constituents will put tremendous pressure on us to take action on [the motion],” he continued.

Last month, Rep. Mark Meadows, R-N.C., filed a motion to vacate the chair, a measure of no confidence in the speaker of the House. The tool hasn’t been used in 100 years, and though Meadows’ motion was a warning shot, the North Carolina Republican told The Daily Signal’s Josh Siegel he would be willing to refile the motion, forcing a vote for speaker within two legislative days.

When the last vote for House speaker was held in January, 25 Republicans, including Brat and Meadows, did not cast votes for Boehner. Brat said he believes that more Republicans—and their constituents—are now unhappy with leadership’s actions.

“Everybody is back home dealing with their constituents right now,” the Virginia Republican said. “On a fiscal mess, Planned Parenthood mess, amnesty mess, and yeah, there’s rumblings.”

Congress returns from a month-long August recess today and will spend the 10 legislative days leading up to Sept. 30 debating how to fund the government. Both the House and Senate passed budget resolutions earlier this year, which directed each chamber to draft and pass 12 appropriations bills funding each federal agency. However, neither the House nor the Senate has passed all 12.

Instead, Congress is expected to pass a continuing resolution, a stopgap spending measure that funds the government at current levels for a full year or until December, when Congress has more time to address the debt ceiling and extend the Highway Trust Fund.

Brat, though, is calling for Congress to forgo the continuing resolution and fund the government through regular order.

“I’m against the CR. I want the normal budget process to go through. I don’t want to break the caps. I don’t want to raise the debt ceiling, and I think the American people voted for Republicans for that exact reason,” he said. “And now, we own both chambers, and they’re waiting to see our leadership.”

In addition to working to pass a continuing resolution, leadership is also fielding demands from conservatives to attach a rider to the bill stripping Planned Parenthood of its federal funding after the Center for Medical Progress released nine videos showing officials with the groups allegedly discussing the sale of organs from aborted fetuses.

Should leadership ignore conservatives’ requests, Brat said he “highly doubts” he will vote for the continuing resolution.

“I don’t know what promises are going to be attached [to the CR],” he said. “But I think a lot of us are going to be under enormous pressure to take a look at the promises we made, and kicking the can down the road, it may not be acceptable to the people for a whole host of reasons.”