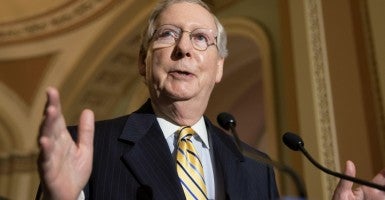 In light of a trio of undercover videos recently released depicting Planned Parenthood officials discussing the harvesting of fetal body parts, Senate Majority Leader Mitch McConnell, R-Ky., said he would fast-track a bill that would strip the organization of its federal funding, promising to hold a vote “next week.”

“The horrendous videos of senior executives from Planned Parenthood discussing in callous tones and shocking detail their role in a national scandal requires a congressional response.”

McConnell, along with eight of his Republican colleagues, gathered on Capitol Hill today to promote the legislation, which was introduced on Tuesday by Sens. Joni Ernst, R-Iowa; James Lankford, R-Okla.; and Rand Paul, R-Ky.

The group of GOP senators said they have the support of the conference and stressed that they are calling not simply to defund Planned Parenthood, but also to redirect its funding to other women’s health care providers.

“What we would like to see is those dollars directed to hospitals, community health centers,” Ernst said.

Sen. John Cornyn, R-Texas, said he has “every confidence” those institutions will be able to absorb an influx of patients with the help of increased funding.

Lankford, a co-sponsor of the bill, said it is “incredibly important” that Congress continue to provide funding for women’s health, “but we don’t continue to provide funding for an organization that makes part of their money off the death of that child, and then part of the money off the sale of the parts of that child to different research facilities.”

When asked if it is premature to defund the organization before completing investigations, Lankford said “no.”

“This is not a prejudgment,” he said. “This is a statement by Congress that this is what we choose to do.”

According to its 2013-2014 annual report, Planned Parenthood received more than $500 million in government funding last year.

In response to the GOP proposal, some Democrats pointed to the “millions of women” the organization serves each year, calling to “stand with Planned Parenthood.”

On Sunday, GOP leadership had the opportunity to attach a defund amendment to the so-called “must-pass” highway bill—which would have avoided the threat of a filibuster—but McConnell refused to bring the measure to a vote, instead promising a stand-alone bill on the issue. This move angered conservatives Sen. Mike Lee, R-Utah, and Sen. Ted Cruz, R-Texas, who accused Senate leadership of prioritizing corporate welfare by allowing a vote on the controversial Export-Import Bank over stripping Planned Parenthood of its federal funding.

To Republicans who are trying to defund Planned Parenthood: Good luck with that.

In the House, Republicans are divided on how to best address the recent Planned Parenthood scandal, with Speaker John Boehner, R-Ohio, suggesting that Congress get “facts first” before defunding the organization and conservatives arguing that there’s no time to wait.

Pro-life members like Rep. Diane Black, R-Tenn., pressured House leadership to take up legislation this week that would place an immediate one-year moratorium on federal funding of the organization until Congress completes its investigations into allegations that it profits off the harvesting of fetal body parts. But members departed this afternoon for their month-long summer break without taking any action.

“I stand here profoundly disappointed that the House will leave town today without taking a vote on my legislation to defund Planned Parenthood,” Black said on the House floor prior to departing.