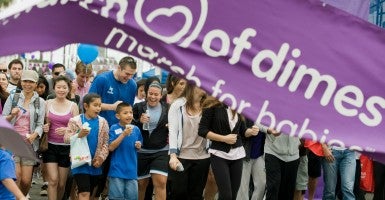 The March of Dimes, an organization that seeks to end premature birth, recently admitted five of its local chapters donated to Planned Parenthood, after claiming to have no relationship with the nation's largest abortion provider. (Photo: Mindy Schauer/ZUMAPRESS/Newscom)

March of Dimes, an organization that seeks to end premature birth, is facing criticism from its supporters for donations local chapters made to Planned Parenthood, the nation’s largest abortion provider.

The controversy comes amid the release of undercover videos about Planned Parenthood’s alleged sale of aborted fetal body parts. Lawmakers in Washington have vowed to cut off taxpayer funding to Planned Parenthood in response to the scandal.

March of Dimes, whose mission is to “help moms have full-term pregnancies and research the problems that threaten the health of babies,” was forced to “set the record straight” about its ties to Planned Parenthood after supporters voiced outrage about the donations.

The uproar began shortly after The Daily Signal published a list of 41 organizations that donate or have donated to Planned Parenthood through direct grants or matching employee gifts. Planned Parenthood featured the names of the groups on its website, but removed them after complaints from companies like Coca-Cola, Ford and Xerox Corp.

Because of its pregnancy-focused mission, March of Dimes supporters flooded the organization’s Facebook page with complaints. That prompted March of Dimes to post this message on July 22 at 9:22 p.m.:

To set the record straight, the March of Dimes does not have a relationship with Planned Parenthood. Additionally, the March of Dimes does not promote or fund abortion services, nor may foundation funds be used for directive counseling regarding abortion. Violation of this policy would be grounds for immediate cancellation of a grant or cooperative agreement. Since 2007, five local March of Dimes chapters have given local grants to Planned Parenthood exclusively for prenatal education. In these communities, these are the only such services available to improve the health of low-income women and reduce the risks of birth defects, low birthweight, and prematurity in their babies.

March of Dimes’ admission was met with a flurry of reaction on social media, with many users incredulous that an organization whose explicit purpose is to help bring pregnancies to term and encourage healthy moms and babies would fund the nation’s largest abortion provider.

In an effort to quell the uproar, two days later, on July 24 at 10:25 a.m., March of Dimes posted this message on Facebook:

A few local March of Dimes chapters have given local grants to Planned Parenthood exclusively for preconception, prenatal, and interconception education in areas of the country where prenatal care is sparse, non-existent or difficult to access. This allows women to get the care they need to help improve the health of both mom and baby. The March of Dimes is neutral on the subject of abortion. The March of Dimes does not encourage, fund, or support abortion services through national, state or community grants, nor may foundation funds be used for directive counseling regarding abortion. Violation of this policy would be grounds for immediate cancellation of a grant.

Commenters, however, have continued to voice their disappointment.

Tony Perkins, president of the Family Research Council, questioned why local chapters were permitted to donate to Planned Parenthood.

“The March of Dimes, which is on the list, had its Facebook page overwhelmed by so many comments that they issued a response which claimed they had no relation to the abortion giant, but then admitted that five local chapters had indeed given money to Planned Parenthood,” Perkins said in a statement.

“I’m not sure that people will buy the line that shifts blame to its local affiliates,” Perkins added. “The national organization could easily require local chapters to adhere to a neutral policy on funding abortion groups.

“The March of Dimes should do some soul searching—if they truly are a group that ‘funds lifesaving research and programs and works to end premature birth, birth defects and infant mortality,’ then why allow local chapters to give money to an organization that sells the body parts of aborted babies?”