Senate Will Attempt to Defund Planned Parenthood Before Recess 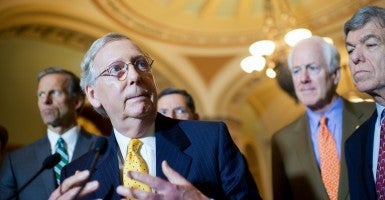 “The leader is working with his members to address this horrific issue and intends to have a vote before we leave,” McConnell spokesman Michael Brumas said.

Republican Sens. Rand Paul, Ky.; James Lankford, Okla.; and Joni Ernst, Iowa, are working on legislation that would block federal funds from Planned Parenthood. The group receives more than $500 million annually in government grants. The money cannot be used for abortions except in specific cases involving rape and incest.

The GOP will need 60 votes to defund the group, and there are 54 Republicans in the Senate.

The House looks unlikely to push a vote to the floor before its August recess beginning later this week.

Rep. Jim Bridenstine, R-Okla., announced legislation Tuesday afternoon that would ban the federal government from entering into a contract with companies that donate to Planned Parenthood.

Bridenstine’s Legislative Director James Mazol said the bill was spurred by a Daily Signal investigation identifying 38 companies that donate directly to the group.

But a House Republican leadership aide told The Hill “the political reality” is that a move to block Planned Parenthood funding does not yet have enough support.

“In order to enact legislation to defund Planned Parenthood, we need more Republicans and Democrats in both the House and the Senate to support our efforts,” the aide said. “In order to get more support for our case, we have to investigate the organization and deliver the facts about their gruesome practices.”

President Obama said he would veto any attempts to defund the group.

Health and Human Services Secretary Sylvia Burwell defended the Planned Parenthood funding in a hearing before the House Tuesday, saying the grants provide preventative care for women including mammograms and cancer screenings. She has not yet watched the videos.

“There are statutes that guide the use of fetal tissue that are in place and should be enforced,” she told the House Education and Workforce Committee.

Burwell said HHS will defer an investigation into Planned Parenthood to the Department of Justice. The DOJ is currently investigating the Center for Medical Progress, the group that released the undercover videos, to determine whether the group obtained the footage legally.

Under federal law, it is illegal to sell fetal tissue for profit, but donations for research are permitted.

Planned Parenthood has denied misconduct, contending that the group legally donates fetal tissue for medical research and does not make a profit from the donations as the videos portray.