Conservative Lawmakers Criticize Leadership on Planned Parenthood Fight: What Would Be Different If ‘Reid Were in Charge’? 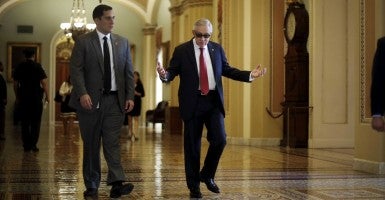 Conservatives in Congress are gearing up for battle this fall over the issue of Planned Parenthood’s federal funding—hoping to leave President Obama in a difficult position.

The goal is to back the president into a corner by forcing him to choose between signing a bill that would strip Planned Parenthood of its taxpayer dollars and redirect that money to women’s health care clinics and shutting down the government by issuing a veto on the entire annual spending package.

The question conservatives are asking is whether the rest of the Republican Party will get on board with sending Obama a bill ending taxpayer funding of Planned Parenthood.

Both Senate Majority Leader Mitch McConnell and House Speaker John Boehner support investigations into questions raised by the videos released by the Center for Medical Progress, but both said they wouldn’t be willing to shut down the government over the issue, given the likelihood of a presidential veto.

Signaling their frustration with leadership, conservatives on Wednesday called out McConnell, telling the Kentucky senator it is time to “do your job.”

“Your predecessor was Harry Reid,” Rep. Tim Huelskamp, R-Kan., said at a monthly gathering of conservatives sponsored by The Daily Signal, directing his comments to McConnell. “You’re no longer Harry Reid; you’re a Republican, Mitch. Stand up. Do your job.”

“How would things have been different if Harry Reid were in charge?” added Rep. Mick Mulvaney, R-S.C. “The answer is, they wouldn’t be.”

The group told reporters that leadership agreed to a “listening session” with conservative members of the House, where they’ll discuss and debate the strategy moving forward.

If they don’t reach an agreement, conservatives signaled that more pushback against leadership could ensue, which reached a boiling point when Rep. Mark Meadows, R-N.C., moved to overthrow House Speaker John Boehner before the August recess.

But as Rep. Jim Jordan, R-Ohio, noted, conservatives aren’t trying to get ahead of themselves and are willing to work with their Republican colleagues before issuing a potential challenge.

“Even [Bill] Belichick doesn’t script the whole game,” Jordan said, referring to the head coach of the New England Patriots. “You’ve got to let it play out—it’s a dynamic process.”

Conservatives want to fund the entire government without taking anything away from women’s health care services. Mulvaney said he wanted to force Obama to “explain whether or not he’s really for women’s health care or he’s just for Planned Parenthood, because that’s what this battle is really about.”

Vicky Hartzler, R-Mo., argued it’s doable because Planned Parenthood makes up such a small fraction of women’s health care in the country, and there are plenty of alternative providers qualified for federal funding.

Jordan, Chairman of the House Freedom Caucus, called the approach “logical” and suggested that it would also leave Senate Democrats in a similar position of shutting down the government over the funding of Planned Parenthood.

“Dollar amount is the same,” he said of the effort to redirect the organization’s 500 million taxpayer dollars. “So the question is, Mr. President, why would you veto that? Why would you filibuster that in the Senate? That is as common sense, [as] logical as you can get.”

Efforts to defund Planned Parenthood of its taxpayer dollars were sparked after a series of videos showing show top officials discussing the sale of body parts from aborted babies for research and altering the procedure to better harvest those organs. Planned Parenthood has denied any wrongdoing and funded a report that concluded that the videos were manipulated.