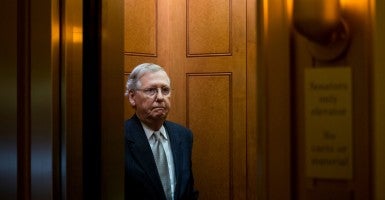 Republican leaders in the Senate unveiled a continuing resolution today that funds the government for less than three months and prohibits Planned Parenthood from receiving federal funds for one year. (Photo: Bill Clark/CQ Roll Call/Newscom)

Senate Republican leaders unveiled a continuing resolution today that would fund the government for just under three months and prohibit Planned Parenthood from receiving federal funding for one year.

The Senate is expected to vote on the bill Thursday, which funds the government at a rate of $1.017 trillion annually until Dec. 11 and places a one-year moratorium on federal funding for Planned Parenthood unless the group and its affiliates certify they do not perform or fund abortions.

The measure stripping the organization of its funding for a year would result in savings of $235 million, Senate Majority Leader Mitch McConnell said today, which will be redirected to community health centers.

“For one year, it would defund Planned Parenthood and protect women’s health by funding community health clinics with that $235 million instead,” he said on the Senate floor. “This would allow us to press the ‘pause’ button as we investigate the serious scandal surrounding Planned Parenthood.”

Conservatives, though, are already pushing back against the continuing resolution and argue it will not stop Planned Parenthood from receiving federal funds. The organization has come under fire recently after a series of undercover videos from the Center for Medical Progress were released showing Planned Parenthood officials discussing the sale of organs and tissue from aborted babies.

“GOP leaders are taking a very passive approach to this fight. In the Senate, they are already signaling defeat. Meanwhile, the House simply waits in silence,” Dan Holler, spokesman for Heritage Action for America, told The Daily Signal. “Despite Thursday’s planned show vote, many Republicans appear willing to continue funneling taxpayer money to the country’s largest abortion provider.”

Republicans need 60 votes to advance the continuing resolution, but McConnell and GOP leaders expect Democrats to vote against the spending measure, killing it in the Senate. Additionally, Republican leadership argues President Obama will veto any legislation that defunds Planned Parenthood.

In the event that the continuing resolution fails to advance in the Senate, Republican leaders are expected to introduce a “clean” stopgap funding bill—one that does not strip Planned Parenthood of its federal dollars—to be voted on next week, thus avoiding a government shutdown, according to The Hill.

McConnell, meanwhile, remained candid about his plans for how he would push forward with funding the government should Democrats prevent the continuing resolution from advancing.

“We’re going to wait until the vote on Thursday and see how that comes out,” he told reporters today. “We’ll let you know the way forward after we see what happens Thursday afternoon.”

“Our committee has approved all 12 of the annual appropriations bills required to meet our national security and domestic priorities. Most of these bills have bipartisan support,” Cochran said in a statement. “I encourage senators to support this continuing resolution so that we can meet our responsibility to the American people to keep our government operations open and address the challenges facing our nation.”

In addition to prohibiting Planned Parenthood from receiving federal funding for one year, the short-term continuing resolution provides $74.7 billion for the Overseas Contingency Operations and extends the authorities of the Federal Aviation Administration, E-verify program and Internet Tax Freedom Act, which expire at the end of the year.