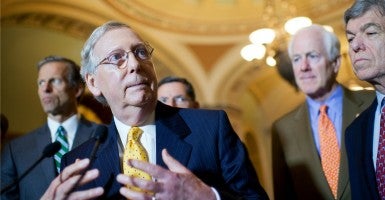 The Senate voted 77-19 Monday to advance a short-term government spending bill, narrowing the chances of a federal shutdown days before Wednesday’s deadline.

With the Senate’s vote Monday, Congress now has two days to finalize a spending agreement for Obama to avoid a shutdown.

The spending measure, which funds the government through Dec. 11, is likely to sail through the Senate on final passage Tuesday. It still must be approved by the Republican-led House. The White House has indicated that Obama would sign the “clean” resolution.

Conservatives criticized the Senate’s vote as a missed opportunity to take action against Planned Parenthood.

“Mitch McConnell is protecting government funding for an organization that has been accused of manipulating abortion procedures to secure higher prices for the sale of baby parts from aborted children,” said Russ Vought, vice president of grassroots outreach for Heritage Action, in an email to conservative activists.

House Speaker John Boehner, who announced his resignation Friday, was asked about a potential shutdown on CBS’ “Face the Nation” Sunday. Boehner vowed that the chamber would take up the Senate’s bill despite heated Republican division over its inclusion of federal funds for Planned Parenthood.

Boehner, who shocked his colleagues last week upon announcing he was stepping down in October, added that he would pursue an investigation into Planned Parenthood following the string of undercover videos showing top officials from the group discussing the sale of aborted babies.

Last week, Senate Democrats blocked a continuing resolution that would have stripped the organization of its $500 million in federal grants. Eight Republican senators split with their party to vote against the measure, leaving the legislation short of the 60 votes needed to overcome a filibuster and advance.

Though Congress will likely avert a government shutdown this week, the fight over funding for Planned Parenthood is likely only delayed until mid-December as House and Senate Republicans have promised to reignite the defund effort.