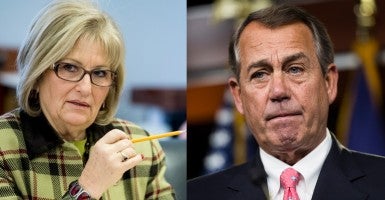 Republicans are divided on how to best address the recent Planned Parenthood scandal, with House Speaker John Boehner suggesting Congress get “facts first” before defunding the organization, and conservatives arguing that there’s no time to wait.

Black, who was a nurse for more than 40 years and is a member of the Congressional Pro-Life Caucus, introduced the Defund Planned Parenthood Act of 2015 this week after videos were released showing Planned Parenthood executives discussing the harvesting of organs from aborted fetuses.

The legislation has the backing of 136 Republican cosponsors along with one Democrat, Rep. Dan Lupinski of Illinois.

The bill would place an immediate moratorium on federal funding of Planned Parenthood for the span of one year while Congress conducts a full investigation into the organization’s activities.

Boehner, R-Ohio, ordered a congressional investigation into Planned Parenthood after the undercover videos were released, which he called “horrific.”

“When an organization monetizes an unborn child—and with the cavalier attitude portrayed in this horrific video—we must all act,” Boehner said.

Yet, Boehner appears to have a different approach than conservatives on how fast Congress should act in light of the undercover videos.

“Many Congressional conservatives and I feel strongly that we should impose a moratorium on taxpayer funding for Planned Parenthood until Congress completes a thorough investigation into their heinous practices,” said Rep. Bill Flores, Chairman of the Republican Study Committee, which is a caucus of 169 conservative members of the House.

“We should impose a moratorium on taxpayer funding for Planned Parenthood until Congress completes a thorough investigation into their heinous practices,” @RepBillFlores said.

Over in the Senate, Republicans appears to be less hesitant to cut off federal funding for Planned Parenthood.

Senate Majority Mitch McConnell, R-Ky., fast-tracked a vote for next week on a bill that would defund Planned Parenthood entirely.

Sen. James Lankford, R-Okla., who introduced corresponding legislation to Black’s bill this week, said he was “pleased” the Senate will have an opportunity to end taxpayer funding for Planned Parenthood as early as next week.

Lankford also said he’s “encouraged” leadership to address this as a “serious issue.”

“I have encouraged leadership to address this serious issue and I am glad to see they stand with the millions of American people who are committed to protecting the children of our nation,” Lankford said.

The content angered many Americans, and caused companies such as Coca-Cola, Ford Motor Co. and Xerox to distance themselves from the organization.

“The allegation that Planned Parenthood profits in any way from tissue donation is not true,” said Cecile Richards, president of Planned Parenthood Federation of America, in a statement. “Our donation programs—like any other high-quality health care providers—follow all laws and ethical guidelines.”

House Minority Leader Nancy Pelosi, D-Calif., says the Republican effort to defund Planned Parenthood is based on “a controversy that doesn’t exist.”