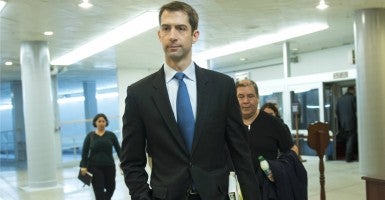 President Obama has not been this mad since last week when Israeli Prime Minister Benjamin Netanyahu addressed a joint session of Congress raising key concerns over the nuclear negotiations with Iran.

In response, the White House marshalled as many voices as it could muster to demonize and delegitimize Netanyahu’s address and the concerns he raised.

Now the Oval Office is at it again.

Obama reacted to a letter sent Monday by 47 senators about the prospects for a nuclear deal by accusing Congress of “wanting to make common cause with the hardliners in Iran.” Others picked up on Obama’s anger. The Daily News posted a headline calling the senators “traitors.”

From constitutional standpoint some might nitpick the letter, but there is no arguing its basic point. If Congress doesn’t sign off on any deal then neither they nor the next U.S. president are bound to abide by it.

Nor can Obama with a straight face claim it is inappropriate or unprecedented for members of Congress to make their voice heard on matters of statecraft—even as the president is crafting what the state will do.

The list of tug-of-war contests between the Hill and the White House is pretty long. The Mexican-American War, the League of Nations debate, the U.S. entry into NATO, the bitter debate over the SALT II talks, the Panama Canal treaty negotiations and U.S. support for the Contras in Nicaragua are just a few examples of such contests.

Obama has only himself to blame if he has lost Congress’ trust. Immigration is a good example. The president’s executive amnesty action has pushed, if not breached, the boundary of the separation of powers.

Obama has already threatened to veto any bill that preempts or limits his authority over Iran sanctions or a nuclear deal. In part, this letter looks like Congress pushing back—declaring it doesn’t want to be plowed under again.

On the other hand, Obama may secretly be happy with the letter. The president has long sought to turn the Iran negotiations into a partisan issue. The truth is there are many in his own party who are deeply skeptical that any deal will keep Tehran from getting a nuclear weapon. The more the president can make it look like putting the brakes on the deal is just the other party out to get him—the more leverage he has to keep his own party in line.

Obama must have been more than a little pleased when members of his own party boycotted Bibi’s speech. He has proven himself more than ready to use this recent letter to fuel partisan rage in the Congress.

The president has said he won’t sign any deal that is not a good deal. But he has also said there is no “Plan B” to the negotiations process. Which is it?  The deepening partisan divide suggests that what the president really wants is a deal at any cost.