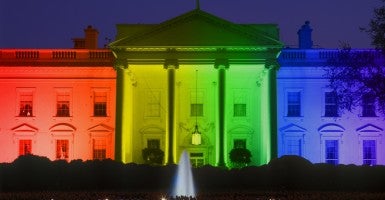 “It makes sense the president would appoint a transgender activist as a faith adviser,” Travis Weber, director of the Center for Religious Liberty at the Family Research Council, says. (Photo: Joe Sohm Visions of America/Newscom)

President Barack Obama’s appointment of a Christian transgender activist as an adviser on faith issues represents part of a larger agenda, some social conservatives fear.

Last month, Obama named Barbara Satin, a man who identifies as a woman, to the President’s Advisory Council on Faith-Based and Neighborhood Partnerships.

Satin is the assistant faith works director for the LGBTQ Task Force and a member of the United Church of Christ, serving on the church’s national executive council. The denomination is among the nation’s most open to the LGBT community. Satin has been the chair of GLBT Generations—an advocacy group for gay, lesbian, bisexual, and transgender people—since 1999.

“It makes sense the president would appoint a transgender activist as a faith adviser,” said Travis Weber, director of the Center for Religious Liberty at the Family Research Council, a social conservative advocacy group. “It would be a bigger surprise if he appointed someone with traditional values.”

Obama has been a strong advocate for LGBT issues. The appointment comes amid a major controversy over freedom of religion laws at the state level and as the administration has threatened to withhold federal funds from schools if transgender people can’t use their restroom of choice.

“The fact that he would appoint someone to the faith-based partnerships council who has been an activist, as she has, fits the Obama administration agenda,” Weber added. “The LGBT agenda has been part of the State Department’s programs overseas, and with Department of Education’s threat to withhold Title IX funding to schools.”

Satin recently worked on the development of Spirit on the Lake, which the White House describes as an “LGBTQ senior housing project in Minneapolis.” Since 2013, Satin has also served on the board of directors of PFund Foundation, a regional LGBT advocacy group covering Iowa, Minnesota, North Dakota, South Dakota, and Wisconsin, according to the White House.

In a statement on the task force website, Satin said:

Given the current political climate, I believe it’s important that a voice of faith representing the transgender and gender non-conforming community—as well as a person of my years, nearly 82—be present and heard in these vital conversations.

The council is charged with identifying the best practices for delivering social services, “evaluating the need for improvements in the implementation and coordination of public policies relating to faith-based and neighborhood organizations,” and making policy recommendations to the president and other administration officials.

The bigger problem is that the council is not representative of America’s faith community, said John Stemberger, president of the Florida Family Policy Council.

“This is more evidence that Obama is attempting a moral revolution pretending the percentages of America is as diverse as his faith council,” Stemberger said. “It’s not a proportional representation of America.”

He added this appointment ties in with the larger debate.

“This is directly related to the bathroom debate,” Stemberger said. “It’s an attempt to push conservative traditional people of faith on this issue. No world religion embraces this moral agenda, at least not in its orthodox form.”

The council is made up of people from different faiths. On the same day Obama named Satin, he also appointed Naseem Kourosh to the council, the human rights officer at the U.S. Bahá’í Office of Public Affairs, and Manjit Singh, co-founder and chairman of the Sikh American Legal Defense and Education Fund.

The White House did not immediately respond to a request to comment on this story. However, after Obama made the appointments to the faith council and other panels, he said in a statement: “These fine public servants bring a depth of experience and tremendous dedication to their important roles. I look forward to working with them.”

Neither the LGBTQ Task Force nor the United Church of Christ responded to inquiries for this story.

Satin grew up as a Catholic, but left the church later in life, according to her biography on the LGBTQ Religious Archives Network website, which said Satin was “raised as a boy.” Satin later served as a pilot in the U.S. Air Force. Satin married and was the father of three children. The bio says Satin did not begin to explore a different gender identity until the age of 54.