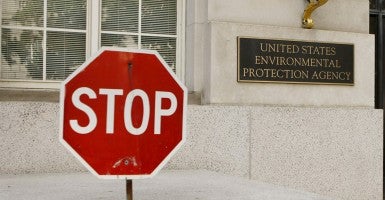 A stop sign is seen at one exit of the United States Environmental Protection Agency in Washington. (Photo: Fang Zhe/Newscom)

The Environmental Protection Agency kicks off public hearings today on its new carbon dioxide and greenhouse gas emissions regulations for power plants. But before the public has its chance to weigh in, the EPA’s plan evoked harsh reactions from a Heritage Foundation panel.

“We sure as heck don’t need rogue agencies that continue to do things and change policy that has not been approved by the public,” Kelly said.

Kreutzer cited a Heritage Foundation study to highlight the steep effects of regulating coal-fired electric power plants out of the market, noting that if the administration were to pursue its “war on coal,” employment would fall by 500,000 jobs by 2030.

“These are very costly regulations that aren’t going to have a measurable impact on the world temperature in a hundred years,” Kreutzer said. “The social cost of carbon does not get them out of that.”

“We sure as heck don’t need rogue agencies,” says Rep. @MikeKellyPA of @EPA.

The loss of these coal-based plants would also cause a family of four’s income to drop by $1,000 per year—a $16,500 loss from now to 2030—which would equate to a $1.47 trillion drop in the nation’s aggregate gross domestic product.

>>> Climate Change Is a Fact. But These New Emissions Regulations Won’t Help the Environment.

Kreutzer said the models used by the EPA to measure carbon’s effect on temperature have been “terrible” at predicting the degree of the earth’s warming.

Yeatman also opposed the EPA’s attempt to regulate carbon, pointing to Congress’ inability to pass cap-and-trade legislation as an indicator of the agency’s executive overreach.

A senior fellow specializing in energy policy and global warming at CEI, Yeatman explained the “most aggressive” regulatory action the EPA can take through the states is called the federal implementation plan, a measure he described as “regulatory takeover” because it involves the “seizure” of a state’s regulatory rights.

>>> How Washington Is Sneakily Implementing Cap and Trade

Yeatman describes this glaring difference as an “unprecedented expansion” of federal power, saying that the power allotted to the EPA through its most recent rule was unintended by Congress.

“[The rule] doesn’t have a clear congressional mandate—if anything I’d say all the evidence suggests the exact opposite, the Congress would have in no way intended this,” Yeatman said. “If Congress hasn’t enacted a climate policy, then why the heck is the EPA?”